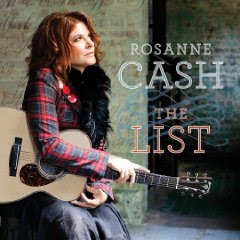 The List is something of a legend. When it became clear Rosanne Cash wanted to follow in her father's footsteps as a performer, Johnny Cash gave her a list of 100 songs to learn as her musical education. The list contained some of the greatest songs of the twentieth century from across all genres (Country, Jazz Blues, Folk, Bluegrass and even Pop). Rosanne Cash has considered doing a covers album for a few years now, and ultimately decided to go back to her musical roots as laid out by her Dad. The List, coming October 6, 2009, contains twelve songs from that venerable document, and is one of the most highly anticipated albums of 2009.

Cash opens with Bill Halley's Miss The Mississippi And You done in a luscious jazz arrangement. Cash shows elements of her Dad in her voice amid some subtle and thrilling guitar work. Motherless Children (Gary Davis) gets a Country/Blues treatment that's extremely well done. Cash is in her best and most affecting voice here. Bruce Springsteen makes a cameo on Don Gibson's Sea Of Heartbreak; a classic song of loneliness. Springsteen is the biggest surprise here, offering up an unusually reserved vocal performance that is a brilliant counterpoint to Cash's voice.

You know that no such List would forget Hank Williams. His Take These Chains From My Heart gets covered here in magical fashion. Rosanne Cash is on her game; and Ol Hank and Johnny would both be very proud of this rendition. Cash plays I'm Movin' On (Hank Snow) as a wonderfully slinky blues tune that is absolutely addicting. I remember hearing the refrain of this song repeatedly as a child on television commercials for Time-Life collections back when they were only available on LP. The song is an enduring one, and Cash keeps the spirit of the original firmly alive while giving it new life. Heartaches By The Number (Ray Price) features Elvis Costello on backing vocals in a tried-and-true rendition that stays very close to the original.

Perhaps the highlight of the disc is Long Black Veil. Mistaken identity, murder and an illicit love affair don't add up quite the way you'd expect in this classic tune that offers observations from beyond the veil. Cash is reverential in her reader of the Danny Dill/Marijohn Wilkin classic made famous by Lefty Frizzell. Wilco's Jeff Tweedy sits in. Up next is a Hank Cochran tune made famous by Patsy Cline; She's Got You has been covered by some many people over the years that the names blend into relative anonymity. Cash brings a fresh sense to this classic in a lush, weaving arrangement you won't soon forget. Bob Dylan's Girl From The North Country is up next in an arrangement that isn't too far removed from the one used by Dylan and dad Johnny back in 1969. If you're not familiar with this tune, you'll note some of the similarities between this song and Simon & Garfunkel's Scarborough Fair. Dylan borrowed a line from Scarborough Fair after learning a lot of British Folk music while staying in London. Cash covers Merle Haggard with the help of Rufus Wainwright on Silver Wings. It's a mellow pop/country arrangement; not my favorite version of the song but not bad. Cash says goodnight with Bury Me Under The Weeping Willow as if she were born to sing the Carter Family classic. It's a brilliant way to close out the disc.

The List is bound to be a popular release this year, and helps explain a lot about Rosanne Cash's musical choices over the years. With eighty-eight more songs that were passed down from father to daughter, don't be entirely surprised if a volume II follows down the road. For now, The List is an estimable collection of classic songs that should be a balm for the soul of fans of classic country music.
Rating: 4.5 Stars (Out of 5)

You can learn more about Rosanne Cash at http://www.rosannecash.com/. The List drops on October 6, 2009. You can pre-order your copy through Amazon.com. Expect wide availability both on the net and at bricks and mortar, as well as via download. Cash will debut the material from The List on WNYC's Soundcheck on September 23, 2009 at 2:00 PM EDT. You can watch the live webcast here.
Posted by Wildy at 5:10 AM