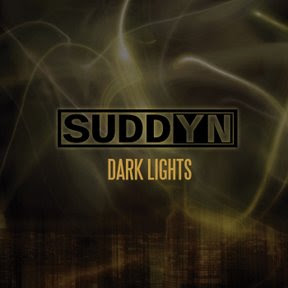 Two brothers from Montauk, Long Island meet two Irish guys... what sounds like the beginning of a joke is actually the genesis of one of the hottest rock acts in Ireland that's building a significant buzz here in the US. With a sound that mixes elements of Queen, Radiohead and U2, Suddyn has racked up three Top-30 singles in Ireland as an Indie act and has already accumulated more than 150 adds in the States from their debut EP, Dark Lights. With a tremendous reputation for their live shows and a glam mentality that's too little seen in Rock N Roll these days, Suddyn shows no signs of slowing down.

Dark Lights opens with Holding Up The Backdrop, a maudlin Modern Rock tune with theatrical ambitions. This is probably great radio fodder but is a bit weak as an opening tune to the EP. Generation, on the other hand, has a darker, more intriguing tone that would probably serve better as a lead song (although not necessarily a lead single). The first two songs on Dark Light suggest a strongly melancholy songwriting style and both are focused heavily on the downside of a relationship. Side Arm opens like a traditional Glam Rock ballad, with vocalist Alan Steil accompanied only by piano. Side Arm focuses on a relationship gone bad, asking for a cessation of hostility and remembrance of what once was. It's a very well written tune and is likely a showstopper live. Dark Lights winds down to Closing Spaces, a song about running away rather than losing; you could almost call it an anthem for cowardice, where it's easier to run than to try. It's an interesting choice and seals Dark Lights in an envelope of melancholy.

Suddyn makes interesting choices on Dark Lights, investing their energy in the darker emotions of loss, regret and fear. It is perhaps music for the times, and hearkens back to a sound and style embraced by bands such as The Cure and The Smiths (although The Cure at least accompanied their lyrical pathos with irrepressible melodies). At the end of the day I'm ambivalent about Dark Lights. There are things here I like (the song construction, the vocalist, the instrumental work), and Side Arm is particularly well-written, but much of the EP just fell a bit flat for me. It's like the energy that Suddyn is so well known for in their live shows simply didn't carry over to the EP. That's unfortunate, because as dark and depressing as they may be, the songs here are actually quite good.

You can learn more about Suddyn at www.myspace.com/suddyn. You can purchase Dark Lights as a download through iTunes.
Posted by Wildy at 5:05 AM

Labels: Queen, Radiohead, Suddyn, The Smiths, U2 The Cure