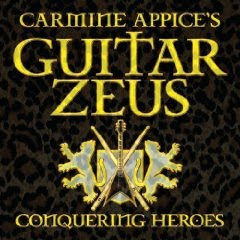 Carmine Appice's Guitar Zeus: Conquering Heroes
2009, Fuel Label Group
Carmine Appice has legendary status in the world of Rock N Roll. A founding member of Vanilla Fudge, Cactus and Beck, Boggert & Appice; Appice has also played with KGB, Paul Stanley, Pink Floyd, Stanley Clarke, Ted Nugent, King Kobra, Blue Murder and Ozzy Osbourne. Appice also played in Rod Stewart's band for a time, co-writing Young Turks and Do Ya Think I'm Sexy. In 1995, Appice created the Guitar Zeus project, an opportunity to do one-off performances/recordings with some of the best guitarists in the world. A total of three Guitar Zeus albums were released during the 1990's, featuring most of the top guitarists of the previous 20 years. Conquering Heroes, released August 25, 2009, compiles the best of those performances on two CDs.

Conquering Heroes is a great opportunity to catch some of the biggest guitar heroes of the past two generations doing what they do best, and occasionally offering some surprise turns in the process. This is some of Appice's finest work behind a drum kit, and each tune runs over with the vibrant energy of a new relationship. If you yearn for the days of the strutting guitar god, then Conquering Heroes is for you. Very well done.

You can learn more about Carmine Appice and the Guitar Zeus project at www.myspace.com/guitarzeus or http://www.carimappice.net/. You can purchase a copy of Conquering Heroes at Amazon.com.
Posted by Wildy at 5:00 AM

Very worthwhile data, lots of thanks for this post.