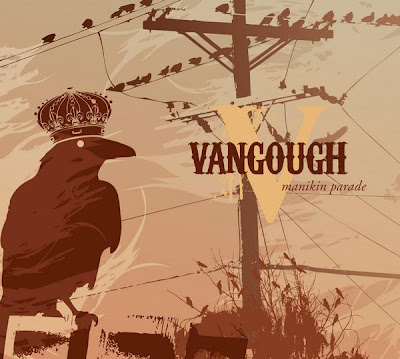 Who needs a sword when you carry an axe? Vangough front man Clay Withrow carries both on the band's debut CD, Manikin Parade, released in April of 2009. Pointed lyrics that cut to the heart are interwoven into a rock and roll matrix filled with heavy guitar, Progressive songwriting and a keyboard style that brings to mind Prog masters Styx, Yes and Genesis. Fans of Dream Theater and Styx will love the theatrical style Vangough projects through their music, and generations can come together over a mix of Classic and Modern Rock that does honor to both. Vangough is Withrow (vox, guitar); Brandon Lopez (drums); Abe Hartley (keys) and Carlton Dorsey (bass, cello, violin).

Manikin Parade kicks off with the Progressive Rock love fest Estranger. Vangough channels Dream Theater, Queen and Styx here. Using a 2-vocalist approach (one of who sounds more than a bit like Tommy Shaw) works incredibly well here, and the song construction is out of this world. There are no tricks here, Vangough has simply let the song develop as it might without trying to restrict it to a tight ABACAB format. The song rocks and yet has a very lyric flow from beginning to end that makes it a highly intriguing listen. Both vocalists are exceptional and Vangough could not have chosen a better opener. Manikin Parade berates the dumbing down of a society that prefers reality television to reality and tweets to conversation in a guitar-driven anthem reminiscent of Queensryche in their Empire days. Christmas Scars drives this point home, focusing on our obsession and glorification of celebrity. What begins as heavy, driven tune with growling vocals trends to a more serene state, passing through rap/vocals and the occasional return to percussive musicality along the way.

Disorder Quotient is a stark examination of both sides of the issue of abuse by priests in the Catholic Church; both the priests' and victims' perspectives are represented in surprisingly even-handed fashion, almost seeming to imply that both are victims of a larger entity (the Church itself, God?). Either way, the song is serious sociopolitical commentary wrapped inside of a dynamic Prog shell. Not wanting to leave anyone out, Vangough turns their eyes to the vaunted gates of Scientology on Paradise For The Lost, essentially calling it out as a business enterprise that sells salvation one course at a time. If possible, there seems to be more anger in Paradise For The Lost than in Disorder Quotient, pulling no punches ("Fail to see his hateful greed / like a church of fools we follow the rules"). Paradise Of The Lost is part one of a three song cycle called The Twilight. Part Two is Gabriel; looking at what can happen to a person when all else (hope, faith, love, self-interest) fails. The song exhorts the subject to move out of the darkness by letting go all these expectations and give in to the magic that is life.

Dance Of The Summer Mind is a nearly six-minute instrumental interlude, primarily of piano and acoustic guitar. It is a beautiful composition that never really soars but continually presses at the sky and serves as a lead-in for One Dark Birthday; focusing on self-exclusion and sorrow. The protagonist here is from all around him by his own choices but doesn't know how to reconnect to the world. Part Three of Twilight is the epic musical odyssey called Etude Of Sorrow. Etude Of Sorrow opens as one of the more straightforward songs on the album, but diverges into what sounds like a convoluted diatribe against God. The narrator turns his back on God because of all he's lost. This is followed by Halcyon Days, which appears to be a song commemorating passing the veil of death. Vangough closes the set with The Cosmic Bus Stop, a highly dramatic representation of what might be waiting after death.

I have to admit that I had a hard time connecting to the subject matter here; I was never 100% certain how much of Manikin Parade is tongue-in-cheek and how much is meant as direct social commentary (or perhaps a smidgen of both). What is clear is that Manikin Parade is a disturbing album full of grand musical compositions, devastating themes and intensely virtuosic musicianship. I may not like all Vangough has to say, but I certainly like the way they say it on Manikin Parade. Think of it as Faust done over for our modern age.

You can learn more about Vangough at www.myspace.com/officialvangough. You can purchase Manikin Parade as either a CD or download via CDBaby.com.
Posted by Wildy at 5:20 AM