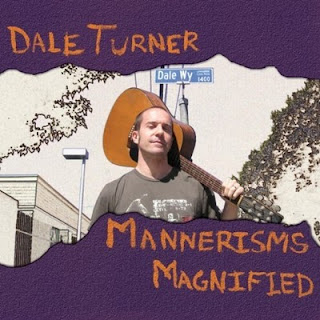 Dale Turner - Mannerisms Magnified
2010, Intimate Audio
There’s an old adage that those who cannot do teach.  Apparently no one ever told Dale Turner.  The former West Coast editor of Guitar One Magazine, current guitar instructor at Hollywood’s Musician’s Institute and author of over fifty instructional books set out in 2005 to write and record an album of original material in true DIY fashion.  Five years later Turner has realized his goal with Mannerisms Magnified, a true solo effort that features Turner in all musical and vocal roles as well as in the capacity of producer, arranger and engineer.
Mannerisms Magnified opens with "Brian On The Brain" a sound collage of vocal snippets ala Brian Wilson's classic Beach Boys vocal harmonies.  It's an incomplete musical picture of the sort that is usually resigned to an untitled bonus track rather than an opener.  "Bad Seed" is a progressive musical construction around the self-story of a black sheep whose greatest misdeeds are indecision and ignorance.  Turner presents a nuanced and smooth arrangement using jazz forms and a prog rock sound.  "Sooner Or Later You'll Hate Her" is a consolation over a relationship that's broken apart.  It's an odd musical choice, but Turner takes an iffy situation and turns it into a workable song that will draw you in.
Things get a bit disconnected in the middle, but Turner picks it up by the time he gets to "Morality Rule".  You might have a hard time following Turner's meaning here, but the funky and rhythmic arrangement is an enjoyable listen to let wash over you.  "Five Things" takes the Brian Wilson-style vocal harmonies introduced in "Brian On The Brain" and puts them to practical use.  The song itself won't ever be favorable compared to a Wilson creation, but Turner certainly captures elements of the sound.  "Civil Lies" draws on a musical progression that Fiona Apple fans will find suspiciously familiar, but is one of the best pieces of songwriting on Mannerisms Magnified.  Turner again drops for the Wilsonian harmonies, and the melancholy feel of the vocal line offers real color and character to an intriguing song.  "Exit Wound" is highly experimental and convoluted, almost more of a sound poem than a song.  This resolves into the instrumental closer "Solace Song", a solid guitar-based tune that cinches the deal without too much excitement.
Dale Turner puts in a solid effort of Mannerisms Magnified, creating intriguing moments along the way but never gaining the sort of momentum that turns an album into an experience.  Turner is a capable guitarist, and his vocals are solid, but the songwriting is inconsistent and unfocused.  There are definitely morsels here worth checking out, however, and the guitarists out there will enjoy picking out some of the finer points of Turner's playing technique.
Rating: 2.5 Stars (Out of 5)
Learn more about Dale Turner at http://www.intimateaudio.com/.  Mannerisms Magnified is available from Amazon.com as a CD or Download

.  Digital copies are also available from iTunes.
Posted by Wildy at 5:59 AM

It's truly a shame when I read such reviews of such a great musician who worked on an extremely great album. Sir before coming up with your comments about the album... Think about this there are 7 notes in a scale... Somewhere down the line something can be close to something else.... I believe Dale's ability to work in so many styles speaks for "Excellence" itself. The album is absolutely fantastic. As far as Fiona Apple is concerned I am sure if she got to know that someone compared her works to Dale she would be more than glad. Dale Turner doesn't need to copy anything... There are only a few musicians around in today's world that are doing some great work... So rather than butchering their work I think it would be better if you support them... We have enough copy cats and posers around the world that get their lame chart hits... Dale is definitely not one of those... This review is absolutely inaccurate... No offense intended.

And those who cannot create, critique.