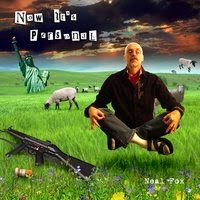 Neal Fox has a talent for making lemonade from lemons (or tomato juice from tomatoes). The man who helped score two of the Attack Of The Killer Tomatoes movies has led something of a charmed cursed life. Neal Fox's first record contract was with Polydor's Event Label. His release Mancini & Fox (with Gus Mancini) produced a charted single. Fox was next signed to Columbia Records by the legendary Clive Davis. Before Fox ever got off the ground with Columbia Davis was fired and no recording ever materialized. Fox then moved to RCA, released A Painting, which included the top-ten hit In The Jungle. As Fox's band was readying to tour the President of RCA was fired, and the tour never happened.

Moving on, Fox had a prize-winning career as a writer of jingles, promo spots and television show themes (including CBS Saturday Morning and The CBS Evening News with Dan Rather). Fox then moved into writing musical scores and finally returned to rock and roll in his home studio. After transplanting himself from California to Sunny Florida, Fox released Now It's Personal in 2008.

Keep in mind that Fox is one of those guys whom everything he touches turns to gold, even if it blows up five minutes later (not in this case). Fox is an incredibly talented and nuanced songwriter, easily adaptable from rock to jazz to blues. Now It's Personal is full of amazing songs, with real life lyrics, great melodies and well constructed arrangements. There's also this occasional flash of a wicked sense of humor that is as disarming as it is biting. Songs like What The Hell Were You Thinking, Sheep and Swank-ay will have you chuckling even as you're tapping your toes. A Cold Day Is Coming is an epic tune that sounds like it should reside on a 1970's classic rock album. We're All Gonna Be There closes out Now It's Personal on a melancholy note that is one of the most beautiful songs on the album.

Neal Fox continues to do what he's always done. Tell real stories about real life in musical packages that are pleasing to the ear and as varied as a Godiva sampler. Now It's Personal is a must-own album, particularly for fans of singer/songwriters and adult contemporary rock. Don't pass this one by, folks.

You can learn more about Neal Fox at www.wireduck.com or www.myspace.com/nealfox. You can purchase a copy of Now It’s Personal at www.cdbaby.com/cd/nealfox6.
Posted by Wildy at 5:56 AM