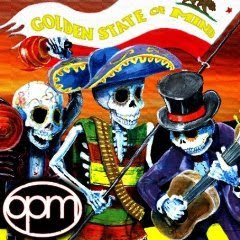 OPM keeps the energy high from the outset of Golden State Of Mind. There is nothing here that is earth shattering or mind bending, but if you are looking for a great party then this would make a good soundtrack. Highlights include Square Peg (Feat. Pato Banton, Family & Friends (Feat. Big B.), Honey (also Feat. Big B.) and Every Minute, which is more of a punk-rock tune.

Golden State Of Mind is a feel-good fifty minutes of modern reggae rock. While not original or ground breaking, OPM’s latest effort is definitely a good time listen. Golden State Of Mind will be released on September 2, 2008.
Rating: 3 Stars (Out of 5)

You can learn more about OPM at http://www.opmden.com/. You can order Golden State Of Mind through Amazon.com.
Posted by Wildy at 5:00 AM