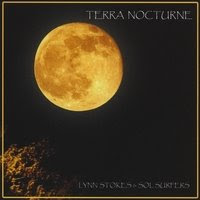 Lynn Stokes is a life-long musician from the Texas scene. A guitar player with many bands over the years, he’s seen space cowboys and the Vaughan Brothers and even opened up once for Bob Dylan. After a musical awakening while researching his family heritage, Stokes began writing his own songs in earnest. In 2007 he formed the Sols Surfers in order to showcase these tunes, and the end result is a lovely little album called Terra Nocturne.

Terra Nocturne opens with Sacred Moon's Light, a mellow song poem peppered with saxophone runs and ethereal instrumental work. Fans of Pink Floyd will absolutely love this tune. In general there have been strong comparisons between Lynn Stokes & The Sol Surfers and Pink Floyd. This particular song sounds as if it could have walked right out of the Wish You Were Here Sessions. Terra Nocturne continues in the same vein, making the most use of stereo channels to walk the sound around the listener. We change speeds a bit with Where Have You Gone, which is more of a piano ballad. The song is gorgeous and reflects some serious training on the piano. Other highlights include The Crossing, Open Door, the melancholy American Dream and Across The Barrier.

It is very clear where Lynn Stokes & The Sol Surfers influences lay. The songs on Terra Nocturne are well crafted, intricate, mellow and psychedelic. Pink Floyd fans and jam band fans in general will really dig Terra Nocturne. The mix of acoustic and electric instruments along with real world sounds sampled in will appeal to mixologists, and the musicality will appeal to the musicians amongst my readers. If you really don't like Pink Floyd, there's no point in going here as you won't be able to get by the similarities. Otherwise it’s an excellent record.

You can learn more about Lynn Stokes & The Sols Surfers at www.Lynnstokes.com or www.myspace.com/solsurfers. You can purchase a copy of Terra Nocturne at www.cdbaby.com/cd/lynnstokes3
Posted by Wildy at 6:08 AM