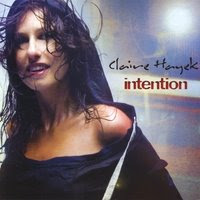 Claire Hayek has a vocal sound that is reminiscent of Cher without the gross vocoder fabrications that she adopted later in her career. Hayek has the same sort of dark timbre to her voice and is very distinctive and easy to recognize (once you know the voice). Intention is a modern rock album that mixes straightforward songwriting with the sort of electro-effects that have become common in rock albums that look to break the dance barrier. 2008 sees the release of Hayek's debut CD, Intention.

Intention is an extremely commercial album with significant radio potential. That being said, the material here is very mixed. In an effort to maximize retail and radio potential it sounds like Claire Hayek's talents are at times squandered on songs that are unworthy of her. This woman has a voice that will bowl you over, but songs like Empty are aptly named fluff that just leaves the listener unfulfilled. Luckily there are some decent songs here. All Means Nothing is a passable radio-friendly song. Charmer is a technorock hybrid with strong middle-eastern influences.

If Only I is one of the gems of Intention. Stripped down to just guitar and voice, you can start to see the true potential of Claire Hayek. Without all of the effects to step over or around, Hayek relaxes and delivers a stunningly beautiful performance. Just Another is a great soundtrack tune, probably for a nighttime teen drama or reality show. Also check out Baby Girl, which wants to be a great song but can't quite escape the producers and becomes merely a good song. Nevertheless it aptly shows off Claire Hayek's voice quite effectively.

Also worth a listen is What About (Mother), written with a baroque opening that opens up into Claire Hayek and piano. The song is pure theater and allows Claire Hayek to paint a very different picture with her voice. This is where you'll decide that you have to buy absolutely anything the woman ever puts out. Is it a hint that Hayek has a strong future in musical theater or at least more dramatic pop rock? Perhaps. What it clearly states is that Hayek is better than at least half the material on Intention. If you're not convinced yet, then check out Redemption Song. You'll weep.

Intention wants to be much better than it is, if only to satisfy the talent and reach of its artist. Instead of earning a place on everyone's Desert Island list, Intention becomes a pretty good album by an incredible artist. In American Idol terms, it's about song selection. The producers share some of the blame in this as well. Production is about bringing out the best in the artist and the song. Sometimes a plain song can be elevated to greatness based on the performance of the artist. The addition of novelty sounds to make a song more palatable is never a good idea, and here backfires completely in a few cases. Nevertheless, a worthwhile album. Claire Hayek should be around for a long time to come. Talent like this never stays hidden.

You can learn more about Claire Hayek at www.myspace.com/clairehayekmusic.com. You can purchase a copy of Intention at www.cdbaby.com/cd/clairehayek.
Posted by Wildy at 5:10 AM