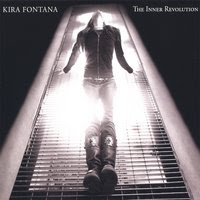 Kira Fontana journeyed from her San Francisco Bay roots to the Eastman School of Music and later Yale graduate school to perfect the art of composition. Somewhere along that path she realized that the essence and being of composition is not in the structures and rules of composition but within the heart of the composer. The catharsis of that discovery is Still, the third track on The Inner Revolution. The Inner Revolution is Fontana's debut album, and it places her firmly in the same ballpark as composers such as Tori Amos, Sinead O'Connor and Kate Bush.

Fontana's songwriting is intense and personal - akin to reading a musical diary. Fontana is neither apologetic nor regretful in telling her stories. The Inner Revolution works because the songwriter is looking into her own eyes as she speaks, and telling tales from the only place that truth resides. Home gives the impression of time slipping around the listener, like a remembrance that is part yesterday and part today. Bloom is a disturbingly beautiful ballad that sounds a little bit like Evanescence without the heavy guitars. The aforementioned Still is the most straightforward ballad on the album, with a quiet beauty that accentuates Fontana's sensuous alto.

Always is a nearly nine minute musical exploration of Fontana's compositional creativity. This is jam music for the classically inclined and is really quite brilliant. Interlude was somewhat lost on me, as it sounds more like a writing exercise than a song. It would make pleasant background music but really didn't have anything to say to me musically. Love is a classic pop/rock ballad. Kira Fontana has a breezy voice here that is hopeful and vulnerable all at once. The album closes with Spark The Fire, a plaintive acoustic guitar ballad that is initially reminiscent of Sarah McLachlan but later devolves into effects-laden exploration.

The Inner Revolution is an extremely intriguing album. Fontana is an artist in the truest sense of the word, as such, sometimes her musical choices may seem a little out of place. This is just Fontana being true to herself as a musician rather than writing for pop glory. While we might not always get the choices, the bravery to make those choices instead of falling prey to an easy pop hook is what music is all about. The Inner Revolution is an excellent introduction to Kira Fontana, from whom I have no doubt there will be much more to hear in the future.
Rating: 4 Stars (Out of 5)

You can learn more about Kira Fontana at http://www.kirafontana.com/. You can purchase a copy of The Inner Revolution at http://cdbaby.com/cd/kirafontana, or on Amazon.com.
Posted by Wildy at 6:05 AM