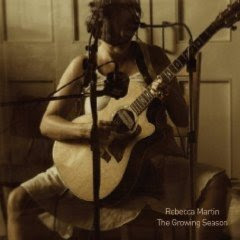 Rebecca Martin can light up a stage. That's the lasting impression I have from a Once Blue show back in 1995. She has a quiet presence and grace that keeps you on the edge of your seat. She also has a voice that makes you hope she never stops singing. This is part of why Martin and Jesse Harris had a minor hit in Save Me. Harris, of course, went on to write several songs (and win a Grammy) for Norah Jones' multi-platinum Come Away With Me. Martin took the quieter path, carving out a career as a New York City based solo artist. Her latest release, The Growing Season, is a continuation of the sort of mellow, folky jazz-pop that has earned Rebecca Martin a devoted fan base over the past decade.

While Rebecca Martin was widely compared to Joni Mitchell when she first burst upon the scene in the mid-1990's, her voice is very much her own. On the opening track, The Space In A Song To Think, we hear the clear cool sound that Martin brings to the mic. She injects serious vulnerability into A Million Miles, and an easy nonchalance into Just A Boy. Other highlights include the lilting What Feels Like Home, the starkly beautiful Make The Days Run Fast, and the introspective Pieces.

Rebecca Martin is content with making great music and staying on the small stage, but hers is a talent that should be heard and seen in much larger venues. The Growing Season is a mature and melodic song cycle that gets more interesting and involved the more you listen to it. I highly recommend The Growing Season to my readers, in addition to any other Rebecca Martin recording.

You can learn more about Rebecca Martin at www.rebeccamartin.com. You can purchase a copy of The Growing Season on Amazon.com.
Posted by Wildy at 12:01 AM