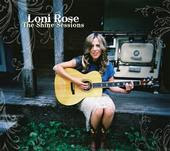 You’re going to find something very familiar about Seattle's Loni Rose. You might not be able to place her, but you’ll be pretty sure you’ve heard her before. You’ll probably be right. Breaking into the spotlight by winning a spot on Lilith Fair in 1999, Loni Rose has never slowed down. More than twenty of her songs have been featured in television shows or the movies since then. Her credits include Providence, Roswell, Jack & Jill, America’s Next Top Model, Meet My Folks, Bad Girls Club, The Hills and MTV’s Road Rules. On the feature film side her songs have been heard in Life Without Dick and the teen classic American Pie. 2008 sees the release of a new CD, The Shine Sessions. Rose is in classic form here.

Loni Rose has a sweet pop sound that is easy on the ears. Her music is infectious and mildly addictive, with melodies that stick around your forebrain for days at a time. The Shine Sessions opens with just such a song, Wrong Way Back. This moves on to Don't Give Up, a chin-up song with Americana roots. Trying Hard is a fun country flavored rock song with a positive message. It's followed by its spiritual yang, Soft Place To Fall, about a relationship full of promise that has faded.

Dangerous is a pure country rock song about loving bad boys, and is a fun song. Other highlights include Until and Shine. Loni Rose has a voice that is sweet and soft with just a little rasp to it. The color and timbre in her voice is interesting and unusual, and means that most anything she sings will capture your attention. Rose also has an ability to write songs that fit the soundtrack of America. It's no wonder then that many of her songs have been licensed for use on TV shows. It's also surprising for all of this that she's not a household name by now. The Shine Sessions is an outstanding release, with great songs and top of the line musicianship. Loni Rose is one artist you should be seeking out.

You can learn more about Loni Rose at www.myspace.com/lonirosemusic. I was not able to find any online outlets selling any of her CDs, so I would recommend that interested readers contact Loni Rose through her MySpace page for order info.
Posted by Wildy at 5:51 AM