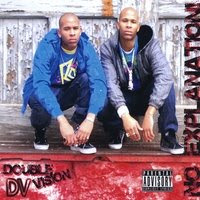 St. Louis’ Double Vision are two of a kind, literally. Twin brothers Jarred (Mr. Mackamore) and Johnathan (Mackamillion) have been rapping since they were seven years old. The Venice, CA born duo have moved around a lot over the years and have consequently picked up quite the range of musical influences. Their debut album, No Explanation! is now available.

No Explanation! makes use of fairly standard rap conventions -- high levels of profanity and misogyny, all while Double Vision claims or implies their mackhood. No Explanation! is interesting lyrically. Aside from the overuse of meaningless words to convey thoughts, as noted above, the twins are fairly adept poets. Both are also quite accomplished on the mic. I did find this album hard to listen to though as I had a hard time with the musical choices that made the bed for their poetry.

I Don't Stop and Back Packer were both quite impressive, as were Devine Attraction, In It To Win It and A Mack's Poem. The musical aspect was unoriginal at best, and downright abrasive at worst (So Cool). I would love to hear these two poet/rappers with a producer who might provide them with a wider horizon of sounds to play against. I think the results would be fantastic. Nevertheless, lyrically there may not be many better.

No Explanation! is a strong accomplishment with some obvious flaws, but on the whole a worthwhile experience. Double Vision are highly talented pair who should be throwing down rhymes of interest for years to come.

You can learn more about Double Vision at www.myspace.com/doublevisionmackrap. You can purchase a copy of No Explanation! at www.cdbaby.com/cd/dvision.
Posted by Wildy at 2:15 PM