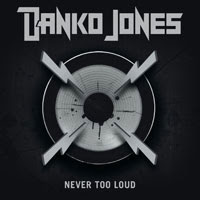 Toronto’s Danko Jones is back. After taking a hiatus to work on songwriting, the hardest working band in show business is ready to rock. On their new album, Never Too Loud, they throw the gauntlet down and play for all their worth. Under the guiding hand of producer Nick Rasculinecz (Rush, Foo Fighters, Velvet Revolver), Danko Jones has crafted the best album of their career to date.

Never Too Loud is a throwback. It's loud, raucous, unrefined, uncouth, and everything you want in a rock and roll record. Danko Jones is at their absolute best on Never Too Loud, with ultra-tight arrangements and driving guitar-based anthems that make for a perfect summer road trip. Code Of The Road captures the energy of old school punk rock and a pop sensibility that actually surprised me somewhat. The song is full of big hooks and crunchy guitar. City Streets continues in the same vein, built on a couple of very interesting guitar progressions. This could be a potential concert favorite.

Still In High School brings out the best in juvenile bad behavior in an eighties influenced punk/pop wrapping. Take Me Home is a great pop/rock tune and just a wee bit funny to boot, and King of Magazines might be the most commercially accessible song here. Truth be told there's not a slow moment on Never Too Loud. Even Ravenous, whose main guitar progression sounds suspiciously similar to Jesse's Girl, has tremendous punk/pop crossover potential.

Never Too Loud is post punk power pop nirvana for the masses. Danko Jones has crafted one of the sharpest and most commercial rock records of 2008 thus far. This is an album that you'll have on continuous play for the first couple weeks you have it. Never Too Loud is infectious and you'll find yourself singing/dancing along.

You can learn more about Danko Jones at www.dankojones.com. You can purchase a copy of Never Too Loud through a link on their website.
Posted by Wildy at 2:14 PM