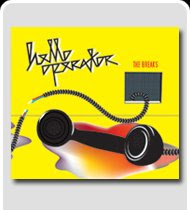 Hello Operator has been getting a lot of positive press of late. One of MacLean’s 12 bands to watch, they’ve appeared on MTV Live, E-Talk Daily, and they’ve been in regular rotation on Much Music and Much Loud. Hello Operator has toured with Hilary Duff, Loverboy, Ill Scarlet, Faber Drive and others. 2007 saw the release of their second EP, The Breaks. The disc breaks new ground for Hello Operator as it sees them transitioning to a more mature sound.

Opening with Chasing Satellites, Hello Operator sounds very late-90's modern rock. This track has distinct commercial potential as the tune is catchy; it drives the listener and will stick around after the song is done. She Lies Like The Devil is an interesting tune. It took me a little while to find a musical match for Hello Operator, and it's obscure. In the early 1990's there was a rock act called The Men who had a moderate hit in the song Church Of Logic, Sin and Love. The Men are actually one of my favorite guilty obsession bands because very few people have heard of them. Hello Operator on the first couple of tracks sound very much like The Men.

Take Me Away shows another side of Hello Operator, a European sound that is part U2 and part Coldplay. They revert to their rockier selves for 55 Regrets and Piece Of My Heart. The Breaks closes out with Things I've Become, which is pure Bono/Chris Martin mix.

Hello Operator is a little band with big potential. Right now they have two very distinct sounds. It will be interesting to see how those two personalities will pair and merge over time, as how this happens will greatly impact the long term fortunes of the band. The Breaks is a great window into the musical vision of Hello Operator. If they manage to fulfill the promise they display then watch out.

You can learn more about Hello Operator at www.hellooperatormusic.com, where you can purchase a copy of The Breaks.
Posted by Wildy at 5:27 AM