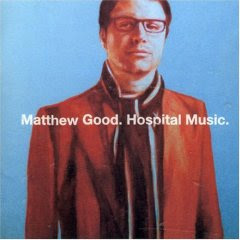 Matthew Good spent the better part of a decade as the darling of the Canadian Indie Rock movement with The Matthew Good Band. MGB releases were anticipated breathlessly across Canada and the US and some of the rarer recordings brought a pretty penny on eBay at one time. Fast forward to 2007 and Matthew Good's newest release, Hospital Music. While perhaps not as "hip" as he once was, Matthew Good has lost none of his social conscience or lyrical ability.

Hospital Music opens with Champions Of Nothing, a mournful musical epitaph for the natural world. While the lyrics are meaningful given the current discussions in the public realm about issues such as global warming, at over ten minutes this becomes something of a dirge. It's a tough way to start an album off. A Single Explosion, on the other hand, may be one of the best things Good has written. Highlights here include Metal Airplanes, Born Losers, Black Helicopter and I'm A Window.

Matthew Good has become something of a blood brother of Michael Stipe over the years. He tends toward the same sort of contemplative lyrics and jangly guitar, although his music sensibilities are just a bit harder than Stipe's. Hospital Music is a strong release from Good, certain to carry at least one or two songs into rotation on commercial radio. Matthew Good fans won't be disappointed

You can learn more about Matthew Good at www.myspace.com/hospitalfacilities. You can purchase Hospital Music at Maple Music.
Posted by Wildy at 6:44 AM