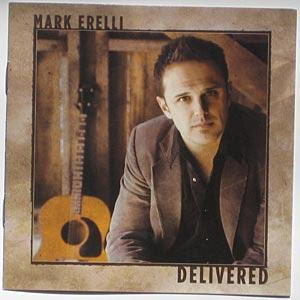 Mark Erelli made me forget that I was reviewing his new CD, Delivered; it's that good. Give yourself a few minutes to sink into this CD and you'll forget what you were thinking about before. Erelli is a singer-songwriter, and one of the rare ones at that. He is literate and thoughtful in his lyrics, with a plainspoken approach that is reminiscent of Bruce Springsteen or Bob Dylan. As a songwriter he is a very special talent -- the sort that doesn't come along all too often. Delivered , Erelli's 7th album, will be released September 16, 2008 on Signature Sounds. Get ready, because this is one for the books.

Delivered is a magical experience from the opening bars of Hope Dies Last to the closing bars of Abraham. Volunteers has a special resonance and honesty that eludes a great many songs that protest war. The story is told from the perspective of a National Guardsman who volunteered to be in service, and who holds his responsibility dear. The tragic hero in the song becomes another expression of a nation's sorrow in a time of war. It is not a bitter condemnation of war, but more an accounting of the cost in extremely personal terms. This song will do more to turn hearts than your typical anti-war song could ever hope to.

Erelli dances around genres a bit, from the folk of Not Alone and orchestrated Man Of The Family to the straight forward rock and roll of Shadowland. What stays true from song to song and genre to genre is the pure songwriting ability and simple honest delivery of Mark Erelli. Delivered is a masterpiece of an album from an artist who has come into his own personally and professionally. Delivered is a Wildy's World Certified Desert Island Disc, and is a must to own. Mark Erelli is well on his way to becoming a legend.

You can learn more about Mark Erelli at www.markerelli.com. Delivered shall be released on September 16, 2008. I expect you’ll be able to order it through is website as well as through Amazon.com.
Posted by Wildy at 7:19 AM