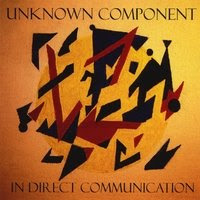 Unknown Component is Keith Lynch, an Iowa City, IA singer/songwriter who has independently released five albums in about as many years. He walks the line between Elliott Smith and Radiohead musically, and In Direct Communication, his 2008 release, stays true to the musical vision he’s put forth to date.

In Direct Communication is an album full of gentle rock songs with intelligent lyrics and a decided lack of pretense. Keith Lynch’s reminds me a bit of Billy Joe from Green Day. His vocal range appears a little limited based on the material, but he makes the most of what he has across the ten songs presented here. There's a bit of an early REM moroseness here that alternates between being intriguing and mildly annoying, depending on the song.

In essence, this is another album that is victim of its own lack of energy. There are some great melodies here, and the lyrics are worth listening to, but songs that fly just never quite make it off the ground. I have all respect for the push in rock music for a softer, quieter sound, but soft and quiet do not have to lack energy.

There are highlights here. On Your Mind is a passable ballad with neat imagery. Brought Up To Be Put Down is the one song that really struggles to break the mold of In Direct Communication. The song itself has a little life to it, but keeps falling back to land.

In Direct Communication is an interesting listen, but more for what it doesn't quite achieve than for what it does. There's a real keen sense of melody here, but the songs never get off the ground.

You can learn more about Unknown Component at www.unknowncomponent.com. You can purchase a copy of In Direct Communication at www.cdbaby.com/cd/unknowncomponent7.
Posted by Wildy at 2:25 PM