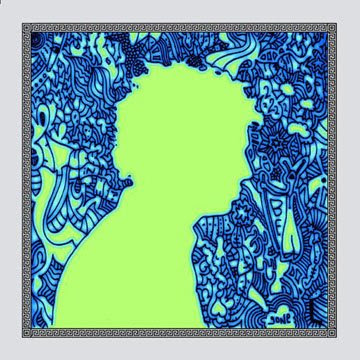 Joshua Gabriel is a son of Philadelphia who made a name for himself in Brooklyn/Manhattan. Currently a denizen of the Bay Area, Gabriel brings a host of influences and talents to 2008's Walk The Plank. As an artist, musician, DJ, filmmaker and writer, Gabriel has multiple artistic interests and pursuits. Musically he has been compared to Beck and Tom Waits, but Gabriel seems to really march to beat of his own drummer. It's easy to believe that any resemblance to another artist is purely accidental.

Joshua Gabriel offers up a mish-mash of beats, loops and crunchy guitar rock on Walk The Plank. There are definite Beck influences here, but without the smooth lyrical ability that Beck brings to his recordings. Gabriel is more of a stream of consciousness writer, making for rougher and rawer lyrical content, musical construction and flow. My favorite track here is Born In The City's, which has more musical sense to it than anything else on the album. Much of the rest of the songs are loosely held together musical constructions that have a hard time finding cohesion.

Joshua Gabriel has some real talent, and it does shine through at times, but like a soup that's cooked too quickly, the contents never quite gel into something more than the collective parts. I'd be curious to see what else Gabriel has up his sleeve musically, because the potential is there. Giving additional time and the patience to allow these songs to grow into themselves would, I think, prove a very valuable exercise. This album screams to be more than it is.

You can learn more about Joshua Gabriel at www.joshuagabriel.com, where you can purchase a copy of Walk The Plank.
Posted by Wildy at 6:35 AM