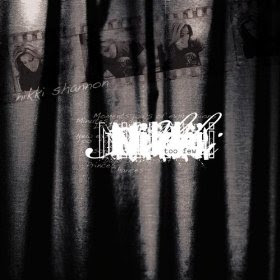 Nikki Shannon has developed a reputation for lighting up a room, whether a small venue or an entire stage.  The veteran of two Broadway shows (Joseph And The Amazing Technicolor Dreamcoat, Grease) has a smile and personality that draws an audience in.  Once she has you she'll wrap you the cocoon of her songs.  Escape is impossible.  Nikki Shannon has paid her dues to get where she is, spending time sleeping in the backs of cabs or in the basements of piano bars where she's played.  Such days appear to be long over for Nikki Shannon however.  The Kingston, NY native's debut album, Too Few, is a dynamic tour-de-force that can not be ignored.

Too Few starts out with a tribute to the woman's curse called Chocolate and Wine.  It's tongue and cheek and gives a peek at the mischievous nature that Nikki Shannon exudes.  Find It Hard To Question is a guitar-rocker that displays some of the unique timbre of Shannon's voice.  There is a Sheryl Crow quality to her voice at times, although at other times she leans more toward Chantal Kreviazuk.  Ultimately the sound is all Nikki Shannon.  Under Her Breath is a classic Americana rock tune about the inner thoughts of an insecure soul.

Other highlights include Beautiful, Inner Circle, Happy and Suffocate.  Nikki Shannon has a voice that melts from her lips like honey from a honeycomb.  The material on Too Few is very strong, with only one or two songs I'm non-committal on.  Too Few should cement Nikki Shannon's career choice as a singer/songwriter.  Too Few is a top notch debut.

You can learn more about Nikki Shannon at www.myspace.com/nikkishannon.  You can download a copy of Too Few at iTunes, Rhapsody, eMusic and Napster.
Posted by Wildy at 12:30 AM