CD Review: The Wag - Soundtrack To A Silent Movie 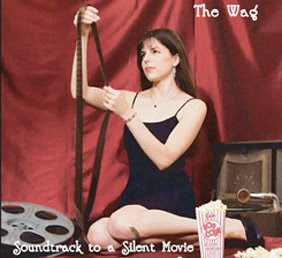 The Wag - Soundtrack To A Silent Movie
2008, DABB Music

The Wag are troubadours. They meld themselves from song to song based on the style, tempo and mood. You can almost convince yourself as you listen to Soundtrack To A Silent Movie that there are several bands within the band. One vocalist sounds vaguely like John Linnell of They Might Be Giants. In all there are three lead vocalists in WAG and each could front a band of their own.

On top of three top notch vocalists, The Wag has some serious songwriting chops. If all of this talent creates a bit of an identity crisis in the sound at times, it's a problem that any band would be happy to have. Soundtrack To A Silent Movie opens with the funk-laden Everyday. Listen to it. I dare you not to tap your feet. You just can't do it. Already Gone has a Spin Doctors groove to it, with crunchy guitars and sweet harmonies. I Know Now is one of several favorites from this disc. Vocalist Alicia Van Sant is a presence with her powerful alto. Long Years is another personal favorite, and Everybody Said is a definite keeper.

Writing On The Wall has a J. Geils feel to it, and Barely Legal is a fun little tune caught in a 1970's time warp. Fear is an instant classic as well. This is one of those albums that is so wide ranging that it's a little bit difficult to classify. Listening through it I was a little bit on the edge of my seat wondering what style The Wag would pull out of their collective hats next. This is the same sort of enjoyment and mystique that followed bards from town to town in the middle ages. Soundtrack To A Silent Movie carries a sense that there's something magical to be discovered around each turn. The Wag are purveyors of high art in the form of some classic rock and roll. This album is a must have - A Wildy's World Certified Desert Island Disc!

You can learn more about The Wag at http://www.thewagband.com/. You can purchase a copy of Soundtrack To A Silent Movie as well as their two other CDs, Long Story Short and Ordinary Day through their website.
Posted by Wildy at 7:29 AM

Hi Wildy-
Alicia from the Wag here. I just wanted to say thank you for such an awesome review!!! :D Sometimes a band will feel like they're doing what they're doing for no one but themselves... and then someone like you comes along and gives a review like this one. It definitely puts renewed wind in our sails! Thanks again so much.
-Alicia
allywag67@aol.com
www.thewagband.com