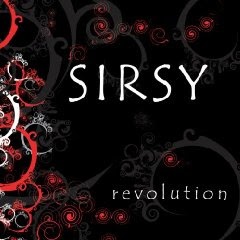 Sirsy might just be the best thing to come out Albany, NY. This two-piece alternative rock band fronted by the inimitable Melanie Krahmer has won fans along the East Coast of the US since their birth in 1999. Krahmer provides unforgettable lead vocals, drums (on a full stand-up kit), flute and occasionally bass. Rich Libutti provides guitar, bass (with his feet, occasionally snare drum (also with feet), and backing vocals. The result is one of the most dynamic and original sounds in rock and roll. Melanie Krahmer can belt and growl with the best of them; she can also open up and sing as sweet as birds. Revolution is the band's fourth studio album, released in 2007, and shows Sirsy reaching a new plateau in songwriting quality while retaining the same edgy soul that has guided them thus far.

Revolution opens with the title track, which features vocalist Melanie Krahmer at her rip-roaring best, as she powers the song into your ears with her throaty roar. Crazy is Krahmer in a sensuous growl over Libutti's Sabbath-esque guitar line, and is one of the darker tunes on the album. Waiting For The Rain turns to a pop sound that begins to fill out the range that Sirsy is more than capable of. This is the most commercial of the songs on Revolution. Still is a melancholy reflection that shows the full range of Krahmer's voice (from sweet to strong to Janis). Other highlights include the poppy Mary Concetta, Mercury, and Fireflies. Fireflies is my personal favorite, and displays a vulnerability and presence that completes the picture of Sirsy.

Having seen this band live in their early stages way back in 1999, it's amazing to see how far they've come. Sirsy was always a great live band with strong songwriting, and Krahmer has always been a mesmerizing front woman, but Sirsy has grown into something much more. This is a band that has transcended their own art to become nothing short of iconic. The fact that they are known only in certain circles does not change the excellence and artistry that they put forth on each song. Revolution is something of a coming of age for Sirsy. Aside from being a Wildy's World Certified Desert Island Disc, it marks the moment when Sirsy moved beyond simply being a band to being rock legends; even if you hadn't heard of them until today.

You can learn more about Sirsy at www.Sirsy.com. You can purchase a copy of Revolution through Amazon.com
Posted by Wildy at 12:39 AM