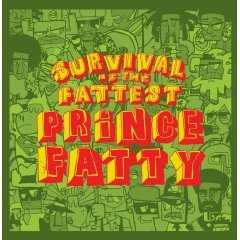 And so it came to pass in the United Kingdom that there was to be a marketing campaign. And of that marketing campaign there was to be a song. Lowly record producer Mike Pelanconi was chosen to fulfill the destiny to which he was born. The advertising executives knew not what they were doing (as is generally the case). Pelanconi created an instrumental track that celebrated the best of 1970’s Jamaican music, and it was a hit. Thus was born Prince Fatty.

Recognizing his destiny (or at least the opportunity for a nice payday), Mike “Prince Fatty” Pelanconi set out to create an entire album of Jamaican dub and reggae in the 1970’s tradition. Thus was born Survival Of The Fattest. Destiny was fulfilled.

Prince Fatty has a great party vibe. This is feel good reggae at its best. There's not a significant amount of variation in tempo or style here, but in this case it’s not needed. Survival Of The Fattest goes down like a shot of hot Jamaican Rum. Highlights include The Fat Panther, Meltdown, Cow Foot and Gravy, Scorpio and Switch Blade.

Survival Of The Fattest includes some of the luminaries of reggae, including Bukky Lee, Style Scott, Bubblers (Ruff Cut Band) and the horns from Roots Radics. Guest vocalists include Hollie Cook (The Slits), Winston Francis and Little Roy. Survival Of The Fattest isn't an overtly political album. It's not extremely socially conscious. It’s not heavy in any way. It's just good time fun. Prince Fatty displays a lot of joy in the making of this music, and you'll reap the rewards.

You can learn more about Prince Fatty at www.myspace.com/princefatty. You can purchase Survival Of The Fattest at Amazon.com and at most major music retailers.
Posted by Wildy at 12:08 AM