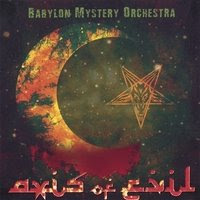 Babylon Mystery Orchestra, aka Sidney Allen Johnson pulls no punches on their view of the War on Terror or on the current state of the world. Axis Of Evil is an exploration of misunderstandings of Islam and those who practice it, socialism, and the elite (or illuminati).

Axis Of Evil opens with clips of George W. Bush and Tony Blair talking about Islam as a peaceful religion, and then the following quote: "Proclaiming themselves to be wise, they became fools". This is the introduction to We Ride, You Die, an open exhortation to destroy the perceived enemy. Indeed, Johnson presents himself on the BMO website in full Crusades regalia. Politically incorrect and extremely provocative, Johnson makes no attempt to sugar coat his message.

The music on Axis Of Evil isn't all that bad. Heavy on guitar and keyboard, Babylon Mystery Orchestra casts a musical landscape that is interesting if not terribly challenging. The lyrics would be interesting in the form of a rock opera where different characters were examined, but Babylon Mystery Orchestra makes very clear their political stance on their website. While I value this recording for the musicality and for the ability of the artist to say what they believe, I warn my readers that some (perhaps many of you) may be offended by the lyrical content.

So in the end we have a musically interesting recording where the message is going to be extremely controversial. Sounds like rock and roll to me. The question, of course, is whether Axis of Evil is a xenophobic prism through which Johnson has interpreted the world, or is this a Randy Newman-esque caricature of individuals who would hate rather than understand? I think I know the answer, but I’ll leave it to my readers to decide for yourselves. Prepare to be intrigued, offended, befuddled, challenged, and maybe even learn something about the world, or about yourself. That’s Babylon Mystery Orchestra.

You can learn more about Babylon Mystery Orchestra at www.babylonmysteryorchestra.com. You can play or download tracks from Axis Of Evil on BMO’s website, or you can purchase the full CD at www.cdbaby.com/cd/bmo4.
Posted by Wildy at 6:25 AM

It cannot truly have success, I believe so.