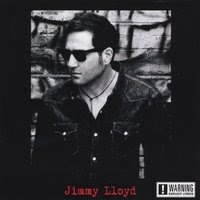 Jimmy Lloyd is to music what HBO was to prime-time TV a few years back. Lloyd takes the usual subjects of day to day life: love, lust, family, dysfunction, hard times and detached rage and places them under the light of truth. Instead of the smarmy ironic lyrics common in popular music, we get the dirty, unvarnished truth, Texas style. Add to this a tremendous ear for great pop hooks and you'll understand why Jimmy Lloyd has built a ravenous following in the New York City/Tri-State area. Jimmy Lloyd released his self-titled debut in 2008, managing to capture all the grit and verbal assault that is key to his live performances.

Half Human is a peppy look at a woman with very poor self-esteem. My Baby's Mother is a comic look at the sort of flash violence that sometimes infects even the most genteel of neighborhoods, particularly in a post-Jerry Springer society. Siddhartha In A Chevy may be the most nuanced song on Jimmy Lloyd, keying on how easy it is to get caught up with the wrong person when you're lonely. Also notable is Your Mother's Boyfriend, which encapsulates a typical two hour Lifetime Movie of the Week into a five-and-a-half minute ode to suburban rage.

Be sure to check out Something's Got To Give, a sociologic explanation for the folks whose neighbors end up on the six o'clock news saying, "He always seemed like a nice gentleman...” The album closes with I Never Say Goodbye, a compelling musical stalker soliloquy.

Jimmy Lloyd has rough edges galore, and occasionally he bombs (Cop Bar), but in general he's right on the money. Jimmy Lloyd is a very talented songwriter who has found a uniquely 21st century American voice in much the same way Dylan found a voice for the 1960's. The tableaus he paints aren't often pretty, but they're compelling and disturbing and are imbued with the beauty of truth, however dark. Jimmy Lloyd is one to watch.

I saw Jimmy play at the Highline Ballroom in NYC. It was amazing. He is a wonderful songwriter and the performers he had playing with him were really great too. Dorie Colangelo and Peasant. Good job Jimmy!