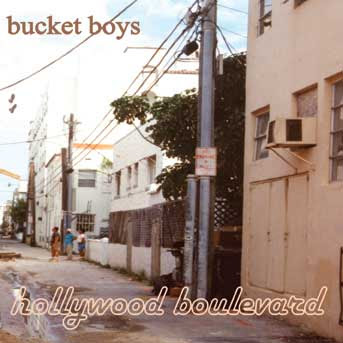 The Bucket Boys have been traversing Europe with their mix of rock, country, blues and TexMex since 1996. The band has built quite a following there and seems ripe for a wade across the pond to North America. In 2006 they release Hollywood Boulevard, their most accomplished album to date.

Michael Lange leads the Bucket Boys through fifteen delicious tracks on Hollywood Boulevard with a sound that ranges from old-school rhythm and blues to gritty alternative rock. My personal favorite here is On The Run, with vocal help from special guest Petra Lange. Petra Lange has a voice you could listen to all day. Open Your Mind is another definite keeper here, with an urgent beat, great guitar work and some tasty B3. Other highlights include Disco Dancer, 600 Miles, Goin' Home and River.

The Bucket Boys have this great sense of pop hooks, strong melody and a little bit of punk energy. Hollywood Boulevard is an album I have to highly recommend. There aren't a lot of artists making music that sounds this authentic. The Bucket Boys are definitely worth checking out.

You can learn more about the Bucket Boys at www.bucket-boys.com, where you can purchase a copy of Hollywood Boulevard and any of their other fine recordings.
Posted by Wildy at 7:05 AM