Toy Soldiers - Whisper Down The Lane 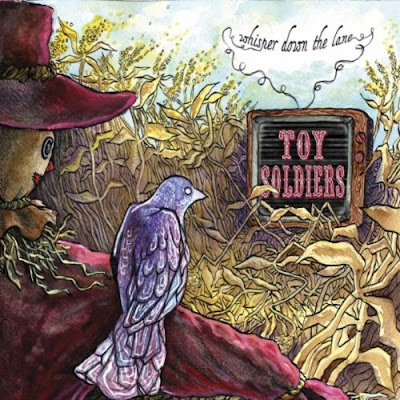 What started out as a joke turned serious. Toy Soldiers was an outlet for Ron Gallo and Mike Baurer, but the band quickly grew to eight members, all dedicated to creating and fleshing out a DIY sound that’s infectious but not from the same tree as modern pop. Toy Soldiers signed with Drexel University’s MAD Dragon Records in early 2010, and will release their debut album, Whisper Down The Lane, on May 18, 2010.

Whisper Down The Lane opens with "Throw Me Down", a solid mix of old school R&B and Garage Rock. Toy Soldiers feature two vocalists prominently. Gallo is dynamic with an eclectic sound that's memorable. FLV has a big, powerful voice that can croon and coo right up to the moment she blows you out of the room. The song is very catchy with a classic call-and-response chorus; the net effect is just a bit messy but fun. "Hard Times" is lively rock n roll with a distinctive mid-1960's feel. Toy Soldiers capture a bit of The Beatles sound on "Love Ya Like I Love Ya", a catchy tune you'll find yourself hitting the repeat button on. Kate Foust gets to show her full range on "Be Right Here", showing off a voice that's both supple and powerful in a tune that also features great messy rock guitar.

Toy Soldiers hit their apex on "When I Tripped Into You", a vibrant rock n roll love song. Gallo is mournful because he's lost his great love, but still revels in the moment it all began. The song is a bit lyrically busy at times but is a fun listen. Toy Soldiers return to the classic R&B sound for "Loaded On Sunday" and keep the vibe going with quasi-Stax style horns on "Myself: Repeated". Whisper Down The Lane closes with "Which Way Waltz", a rambling tune that means well and serves as a decent if unspectacular tie-together of an album that celebrates a loose and fun musical style.

Whisper Down The Lane is a solid effort from Toy Soldiers. Listeners may be left with the impression that Toy Soldiers may be more impressive live than in the studio; the band gives the impression of one that is more interested in enjoying what they're doing than nailing down every detail in the studio. It's a refreshing approach in a day and age when every note tends to analyzed and often modified by computer programs and over-zealous producers.

Learn more about Toy Soldiers at wordpress.toysoldiers.com. Whispher Down The Lane is due out on May 18. 2010. Amazon.com offers both CD and digital versions. Digital copies are also available through iTunes.
Posted by Wildy at 5:00 AM

This album is awesome. So glad I have it, it's a great mix of old school and new school rock. I really recommend it !!!!

Whisper Down The Lane is quite a wonderful mix of Americana rock with a blues-ish twist. The band's sound is new and intriguing. I"m sure this group of eight will find success with fans looking for a fresh album.

I'm definitely really digging this album! It's a nice breathe of fresh air in this age in music where a lot of things are pre-programmed into keyboards and laptops. Their fusion of indie rock and country/bluegrass is extremely original and creative. My favorite track is number 5, "Be Right Here." Definitely very catchy! If you haven't checked these guys out do it now and then go out and buy their album!

This is definitely a great album! I've had "When I Tripped into You" stuck in my head for days now. I hope to catch these guys live soon!

this album is beautiful! So nice to hear something so put together. Toy Soldiers truly is a collective of extremely talented musicians, no doubt about it!

Toy Soldiers are really able to capture the sound what summer-time music should be. "When I Tripped Into You" is definitely my favorite song off the album; it so catchy and attention-grabbing!

This is definitely an awesome album! I've totally been digging this! It's perfect for the summer and if you haven't checked it out, you need to do so!!!!