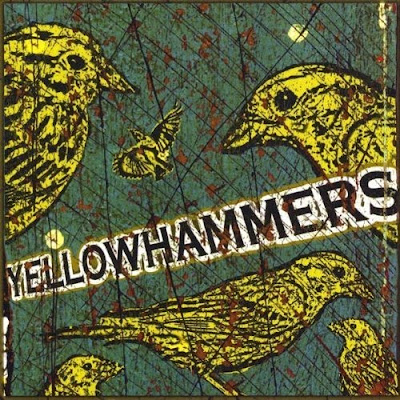 From Chicago’s West Side come the roots rock aficionados Yellowhammers. Together since 1994, the Yellowhammers tour primarily in Chicago, Wisconsin and Minnesota, working with acts such as Joe Walsh, Billy Preston, Jane’s Addiction and the Smashing Pumpkins over time. For their most recent album, Yellowhammers, the band hooked up with producer Jon Langford (The Mekons, The Old 97’s, Alejandro Escovedo).

Yellowhammers opens with "Everybody's Joking", an easy-going Americana tune with a strong, clear melody and a quirky sensibility that work well together. Shades of New Orleans find their way in there as well, in a tune that will just make you want to smile. "Don't Slow Me Down" keeps the easy-going feel in a placid mid-tempo country-rock tune about watching your world walk away and being powerless to stop it. "St. Clair, The Cop And Ann Marie" is a dark tale of crime, police brutality and revenge, delivery in a jaunty country arrangement. It's an entertaining story song in the American Folk tradition.

The Yellowhammers take side trips into grit and whimsy on "Someday Down The Road" and "Women Strong", before launching into the Rolling Stones-inspired rocker C'mon Elvis. It's an ode to the King of Rock N Roll that's as awkward in lyrical presentation as it is reverent. "Holding Hands" is a sweet, mournful love song. From a vocal/melody standpoint it is a bit of a difficult listen. Vocalist Terry White strains to put big emotion into the song, but it becomes a bit of a cartoon feel at times. The song itself has a pretty melody and is vaguely reminiscent of Blue Rodeo in sound. "(Don't Go Back) To Rockville" is a solid, mid-tempo light rock/country tune with a decent sound; an unpretentious set up for the closing track, "Just The Same". This plaintive love song speaks of devotion and hope drawn from a melancholy palette.

The Yellowhammers bring a rough around the edges, down home ease to their self-titled debut album. Not every song works, but in general it's a solid effort worth checking out.