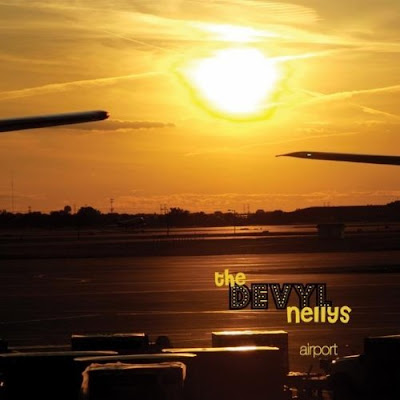 New York City-based outfit The Devyl Nellys bring a distinctive 1960’s vibe blended with modern pop sensibilities on their third EP, Airport. While young as an ensemble, The Devyl Nellys have already gained significant attention from national and regional radio shows, and their music has already been placed on The Discovery Channel, The History Channel and a national compilation from The Gap. With two amazing voices in Nelly Levon and Tim Noyes, The Devyl Nellys craft sounds that are ultimately pleasing to the ear.

Airport opens with "All Is Done" a gentle rocker ala Natalie Merchant with Nelly Levon on vocals. Levon has a pleasant also voice with real texture and a warmth you just can't teach. It's a solid opener with just a little bit of soul. "Airport" features Tim Noyes at the mic, juxtaposing active rhythms with an ethereal, dreamy arrangement. The song is quietly impressive, like a soliloquy in a play, and is built in a simple construction around a solid melody/vocal line. "Coming On" is a country-western tune about how love can take you by surprise. Levon is back on vocals with a performance that can't help but endear her to your ears. "Settle" is laid-back, sophisticated pop music. Noyes is a crooner, a fact that is wholly evident here, particularly as he moves into his upper range. Airport closes with Alone, a dark, bluesy rocker that both Tim Noyes and Nelly Levon in play. It's a decent enough closer, good enough to get you wondering about what might come next from The Devyl Nellys.

Airport doesn't really have one standout track, but is five above-average tracks packaged together in tight arrangements and alternating the impressive voices of Tim Noyes and Nelly Levon. The Devyl Nellys show real potential as artists. This is a band you won't be surprised to see still together a decade or two down the road. While not flashy, they deliver solid, impressive performances song after song. Thoughtful lyrics with the occasional twist of wit highlight arrangements that seem to write themselves. Come glide with the Devyl Nellys.

Learn more about The Devyl Nellys at www.myspace.com/thedevylnellys. Airport is available as either a CD or Download from Amazon.com.
Posted by Wildy at 5:00 AM