The Grascals - The Famous Lefty Flynn's 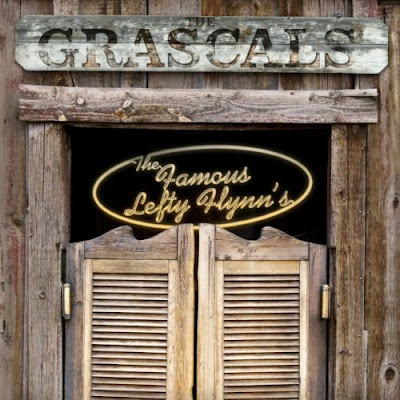 Six time International Bluegrass Music Association Award winners The Grascals return with their fourth album, The Famous Lefty Flynn’s, mixing sounds traditional and modern in one of the most dynamic bluegrass albums of the year. With their roots firmly established in Nashville, The Grascals caught the ear of Dolly Parton early on, becoming her opening act and house band for a couple of years. The original quartet has grown to six members over the years, filling out a sound that is considered one of the most dynamic in Bluegrass music today.

The Famous Lefty Flynn's opens with "Last Train To Clarksville", an anti-war song written during the Vietnam war and made famous by the Monkees in 1966. The Grascals maintain the pop sensibility of the original while injecting a bit of Bill Monroe along with gorgeous vocal harmonies. "Son Of A Sawmill Man" is a barrel-ride of a song; a head-long musical rush you won't want to miss. It's highly entertaining, and Terry Eldredge shows off a great voice in the process, while the vocal harmonies are heavenly. "Satan And Grandma" is an amazing tune, coming out of a modern mix of gospel and bluegrass. "Satan And Grandma" is an ode to a matriarch who fought for her family and continually guided them toward the light.

"Everytime" is the song of a restless heart that is never happy where he is and always looking forward to the next place he'll be. "Out Comes The Sun" is a counter-intuitive love song, celebrating the times his baby is away, and extolling her ability to steal the light out of the day. The Grascals go instrumental on "Blue Rock Slide", showing off outstanding fiddle work supported by guitar and banjo work that while make the musicians in the crowd sick with envy. "The Famous Lefty Flynn" is a fabulous story song that pitches myth against reality in a story about treasure lost and treasure found.

"My Baby's Waiting On The Other Side" is blazing fast, full of amazing vocal harmonies and tremendous instrumental interplay. The song features the hottest fiddle work on the CD, and Terry Eldredge is absolutely on fire on the guitar. The Grascals' cover of Steve Earle's "My Old Friend The Blues" is solid, although perhaps not as inspired as the one by The Proclaimers a number of years back (and nowhere near the original). The Grascals put in a couple of solid if unremarkable turns on "Up This Hill And Down" and "I'm Blue I'm Lonesome" before launching into the pretty and heartfelt "Give Me Jesus". Something has happened to the energy level on the last four songs of the album, as if the band needed to pick four more songs to fill out the album and had to cull their previous cast-offs to make up space. The last four songs are all solid, just not up to the level of what came before.

The Grascals are exciting to listen to. As instrumentalists the band achieves moments of chemistry that are awe-inspiring. The final third of the album is certainly a letdown from the first eight songs, but on the whole this is a solid-to-plus album that's definitely worth spending some time on. The Grascals have the push of a big label and access to enough radio outlets that The Famous Lefty Flynn's is likely to be commercially successful, but in their best moments, The Grascals find the sort of sublime musicality that makes commercial success an afterthought.
Rating: 3.5 Stars (Out of 5)

Learn more about The Grascals at http://www.grascals.com/ or www.myspace.com/thegrascals. The Famous Lefty Flynn's is available as a CD or Download from Amazon.com. Digital copies are alsso available from iTunes.
Posted by Wildy at 6:18 AM