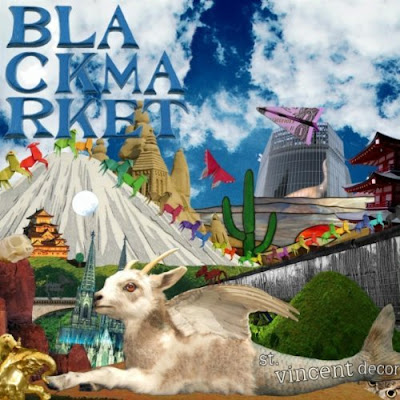 Lake Havasu, Arizona rockers Blackmarket return with their sophomore album, St. Vincent Décor, a chronicle of angst and intensity that runs all over the map stylistically. From the catchy garage pop of the first single, “Tongue Twister Days” to the intriguing fingerstyle guitar work of “Catch And Release”, Blackmarket exploits the full range of their musical talents on St. Vincent Décor. The middle stretch of the album is a bit weak, but songs such as “Nearsighted”, “The One I Know You’re Not” and “Dot To Dot” show off the band’s unusual mix of garage rock, angst-filled songwriting and pop sensibility. Fans of The Tragically Hip will be mildly intrigued.

Learn more about Blackmarket at http://www.blackmarketaz.com/ or www.myspace.com/blackmarketaz. St. Vincent Décor is available digitally from both Amazon.com and iTunes.
Posted by Wildy at 5:10 AM