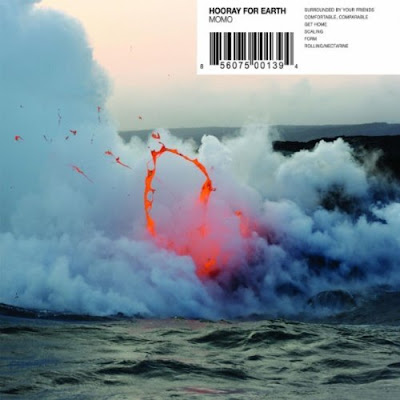 Hooray For Earth got their start in Boston in 2005, although the roots of the band can be traced back to a Cambridge, Massachusetts basement almost ten years earlier. Having since moved to New York City, Hooray For Earth has quickly gained a lot of fans with their highly variable brand of electro-pop. On June 1, 2010, Dovecote Records re-releases Hooray For Earth’s EP Momo. Previously only available in digital formats, Momo can be had on CD or vinyl (as well as digital).

Momo opens with "Surrounded By Your Friends", a mellow but catchy electro-pop tune that remembers that pop is part of the equation. Built up with lush harmonies and a punctuating bass line, "Surrounded By Your Friends" shows a melodic touch that's definitively influenced by some of the great Brit Rock bands over the years. "Comfortable, Comparable" is quietly catchy, although the vocals are a bit buried inside of the arrangement. Momo descends into bland pop with "Get Home", turning into outright cacophony on "Scaling". Sound and layering persevere over melody and progression in this repetitive and sonically discomfiting composition. Hooray For Earth head for the garage on "Form", an entertainingly messy rock tune built on a simple rock beat and electronic progression. The song has a distinct pop sensibility even if the band tries to hide it well. Momo closes with "Rolling/Nectarine", a repetitive and droning bit of Depeche Mode style pop that loses its charm quickly.

Hooray For Earth is all over the map on their most recent EP, Momo; morphing from a catchy electro-pop band into a droning and cacophonous experimental outlet before sidling up to the dance floor with a light-club offering that adds more confusion than stability to the band's sound. While the heterogeneity in sound is a welcome effort, in this case it leaves Hooray For Earth sounding like they're casting about to find their own identity as a band. There are strong moments on Momo, but there's also some time when Hooray For Earth sounds lost.

Learn more about Hooray For Earth at http://www.hoorayforearth.net/ or www.myspace.com/hooray4earth. Momo can be purchased on CD from Amazon.com. Digital copies are available from Amazon .
Posted by Wildy at 4:55 AM