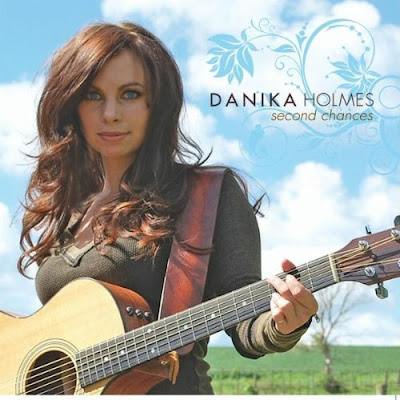 Danika Holmes grew up in Eastern Iowa with music on the brain. As part of a close-knit family, Holmes grew up playing piano and singing show tunes, spending much of her youth involved in the arts. High school and college beckoned, and Holmes turned her focus to academic pursuits. On the brink of completed her Ph.D., Holmes suffered two major personal tragedies that led her to re-evaluate her direction. In her darkest hour she turned back to music. Working with a longtime family friend, Holmes began crafting songs for her debut album, Second Chances. It’s a highly personal first step on a path with a lot of potential.

Second Chances is full of hits and misses. At her best, Holmes is charming and energetic. She starts out tentatively with "Half As Strong As You", picking things up a bit on the chorus, but not making the best first impression. "Unlit Match" finds Holmes warming up nicely with a strong, bluesy folk/rocker about potential. It's a highly enjoyable tune that perhaps would have been a more suitable lead track. Second Chances stays mired in middling songs for a bit until Holmes stumbles into "If You Love Me, Just Say It". Here Holmes is full of life, with a catchy folk tune with real pop sensibility. "Pockets Full Of Gold" is a wonderful tune about not being distracted by money and the ways of the world. Here love reigns as the most important thing amidst difficult economic times; implying love will carry them through anything. Things fizzle on the title track, and turn amateurish on "Dear Friends", a well-meant but awkward ode to friends and family that likely would have been better suited to the liner notes of the album.

Danika Holmes spins some bright moments in song on Second Chances, but much of the album is too mundane to gain much attention, and a couple of the songs presented here are simply specimens too rough for public consumption. Holmes' looks like an all-American girl, and her voice has its charms. I suspect with time the rough edges will wear out of her songwriting, as she shows the potential to do more at times on Second Chances. Danika Holmes may just be one to watch.

Rating: 2 Stars (Out of 5)
Learn more about Danika Holmes at http://www.danikaholmes.com/ or www.myspace.com/danikaholmes. Second Chances is available as either a CD or Download from CDBaby. Digital copies are also available via iTunes.
Posted by Wildy at 5:00 AM