The John Byrne Band - After The Wake 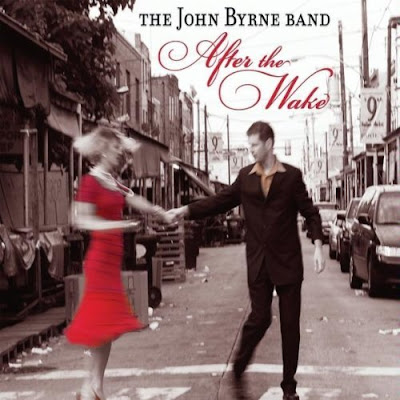 Dublin-born singer/songwriter John Byrne came to the US as a teenager. As a 1960's folk fan in his native Ireland, Byrne explored both the music of Bob Dylan and his influences, as well as delving deeper into the Celtic musical traditions of his upbringing. Dylan, Woody Guthrie and Ramblin' Jack Elliot all had major effects on Byrne as a music fan and burgeoning songwriter, as did the poly-melodic stylings of the band Planxty. Byrne is a co-founder of Celtic band Patrick's Head, a fan-favorite for their eight year run in the Northeast US. In February of 2010, John Byrne stepped out in another direction, combining his love of American folk and Celtic roots music with his new band. The John Byrne band's debut album, After The Wake shows off the distinctive voice and songwriting of Byrne as well as the supple and talented musicians he's surrounded himself with: Bassist Jaron Olevsky (Amos Lee); drummer Freddie Berman (Amos Lee); fiddler Sara Milonovich (Pete Seeger, The McKrells) and on guitar, banjo and production board Andrew Keenan among others.

After The Wake opens with "In Your Savior's Place", a musical dichotomy that's interesting for the conflict between what it sounds like and what it actually is. "In Your Savior's Place" is delivered in a pretty Americana arrangement full of strong vocal harmonies and top-notch instrumental work. In spite of the uplifting sounding chorus, it's a dark and angry song rife with jealousy. Byrne is gritty in the verses, fueling the impression of darker thoughts delivered in rosy terms. "It's A Gas That Makes You Laugh" continues the trend of upbeat, gritty tunes. The arrangement here is just outstanding; highly danceable in spite of the dark subject matter. It's a brilliant tune about suffocating (figuratively) in a place you never wanted to be but can't seem to leave. Byrne ruminates on life's status as a patchwork built from our history in "Various Verses", casting music and life as reflections of one another in metaphorical terms. This is offered in a gentle Celtic arrangement with a mournful feel; a great listen.

"A Song With No Words" is a subtle love song with a mournful feel. Flute serves as a haunting garnish, while Milonovich delivers the stark counter melody to Byrne's competent vocal. Byrne shows a story-teller's flair on "See You Then", detailing the loss of a friendship and offering advice about moving on. This is great songwriting, delivered with the aplomb of a master carver of tales. Byrne pays tribute to Bob Dylan on "Boys Forget The Whale", a delicious blues-flavored folk/rock romp that will be on repeat no matter what form your music player takes. At eight minutes the rapid fire prose of this song takes some listening stamina, but the song is brilliantly delivered and will keep listeners engaged from start to finish.

For all the quality that's come before, "Old Man's Disguise" may be the best pure songwriting on the album. It's not flashy or garish, but a quietly forceful musical recollection full of stirring imagery and palpable emotion. "The Ballad Of Martin Doyle" is a mournful ode to an Irish hero of World War I for the British Army who later served in the Irish Republican Army in its fight for independence. The song laments the loss of a homeland, and seems to regret the conflict of serving a country that has taken away his home. After The Wake closes with "Already Gone", a gorgeous and sad tune that's loaded with a pragmatic sense of destiny and many layers of meaning ("What's one more drink when you're already gone.") It's a brilliant closer, though provoking and full of heart while remaining ultimately tuneful.

Rating: 5 Stars (Out of 5)
Learn more about The John Byrne Band at http://www.johnbyrneband.com/ or www.myspace.com/byrnemusic. After The Wake is available as either a CD or Download from Amazon.com.
Posted by Wildy at 5:10 AM

Hey Wildy,
This is John Byrne. I just wanted to thank you for your review. I am really touched that you thought so highly of the album and very glad that it found its way into your hands. When you're trying to get your music out there it can be very often frustrating and disheartening; things like this and people like you are priceless to indie musicians.
All the very best,
John

I for one agree whole-heartedly with this review. I own John Byrne's brilliant new CD and have been a fan since his Patrick's Head days. This latest work of art has a top-notch production and songs that make you care about the characters. Dare I say better than anything he's done with Patrick's Head. Highly recommended!

Thank you for your article, quite effective information.