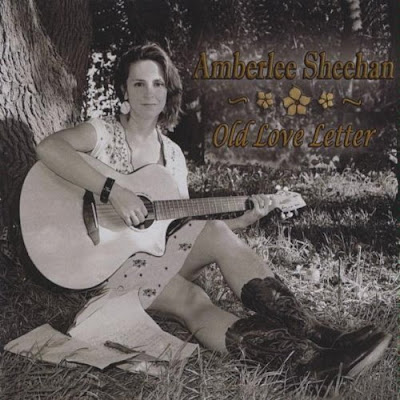 Chicago’s Amberlee Sheehan recalls a more primitive time in country music, when it was more about the music and the personality behind it than the image projected by marketing companies. Sheehan dwells in the musical valley between old-time Nashville and Appalachia on her debut album, Old Love Letter, with songs of loves won and lost and the sometimes unsteady truces that lay between. In the process Sheehan touches on rockabilly and the Sun Records sounds, with a voice that's anachronistic but refreshingly real. Sheehan will win you with a vitality that's infectious even as she struggles at times on the slower material.

Old Lover Letter opens with "Sleep Baby", a sweet love song about an ideal love and the moments of peace found in the arms of the right person. "Old Love Letter" is a song about love and how it cools over time. Sheehan shows the effects of one who doesn't feel the same level of attention as she once knew and looks longingly back to a time when love ran hot. Sheehan pays tribute to her father with "A Good Man", done in a timeless story-telling style. Sheehan imbues the song with a great melody and a solid, comfortable arrangement.

Sheehan brings to mind Kitty Wells with "Reason To Sing", a great country love song with real pop sensibility. Sheehan struggles with some of the slower material on the album, ("January Morning", "Whole Again", "My Heart Of Blue"), but excels on "A Bird In The Sun". It's a song of picking up the pieces and moving on and sounds like a classic country heartbreaker. Sheehan breaks out of her country roots with the angry, Neil Young-esque rocker "I'm Still Here", in which she berates the man who left her behind. "I'm Still Here" is a pleasant surprise, even if it's clear that Sheehan doesn't have (or didn't think to use) the big powerful voice the song calls for. Sheehan's sound is a bit more lyric, while this tune calls for at least a dose of Joplin/Etheridge grit. Old Love Letter closes with "Clear Blue Sky", a song of hope built around a great melody. This may be the best songwriting on the disc, but the song is not well-produced. Sheehan's voice is too buried inside the instrumentation and has a tinny quality that is perhaps meant to sound antiquated but really doesn't do justice to Sheehan or the song. It would be interesting to hear this song re-recorded as the production keeps it from reaching its full potential.

Amberlee Sheehan goes for an organic sound on Old Love Letter, mostly eschewing recording tricks for a folksy, unvarnished sound that serves her well. Old Love Letter was the project of a lifetime for Sheehan, and is a definite accomplishment, particularly as a recording debut. If you're tired of all the polish and gloss in modern country music, then Amberlee Sheehan will be a welcome breath of fresh air. Sheehan's only going to get better. With Old Love Letter she'll sneak up on you. You'll fall for the album a bit more each time you listen to it.

Learn more about Amberlee Sheehan at www.myspace.com/amberleesheehan. Old Love Letter is available as either a CD or Download from Amazon.com.
Posted by Wildy at 5:38 AM