The Portraits - The Blushing Of A World In White 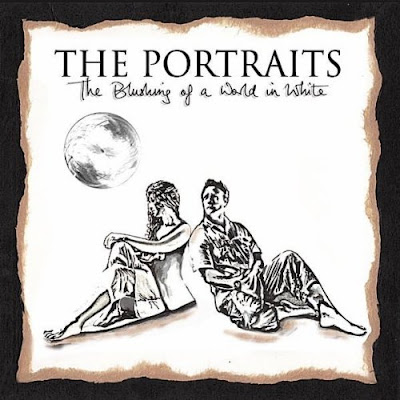 When art tutor Lorraine Reilly met music teacher Jeremy Millington over a decade ago, the two were teachers at a school on the Isle Of Wight. Both sought creative outlets, but never dreamed that they'd one day leave their day jobs and forms a partnership that would still thrive ten years into the third millennium. As The Portraits, Reilly and Millington have released two critically acclaimed albums. We had the pleasure of reviewing their sophomore effort, Timescape, last year, finding The Portraits' blend of classical construction, pop sensibility and intelligently nuanced lyrics to be refreshing. On June 21, 2010, The Portraits will release their third album, The Blushing Of A World In White, stripping away the electronic elements that have dominated their two prior releases and offering an acoustic set that gives greater prominence to their traditionally angelic vocal harmonies.

The Blushing Of A World In White opens with "The Writer", a brilliant song of need. The lead voice here is that of a character in a book that waits urgently for the one who provides her prime force to return and create. It's something of a surreal premise, but very artfully done and full of abject beauty. "Strong Cien Secretos" is solid light Latin pop; you could imagine this making a dent on World pop charts around the globe. Elements of pop and jazz wiggle their way in between the lines. "Undo" documents the connections to those who touch our lives and how time drapes them across our souls like layers of our skin. It's an amazingly powerful allegory, a true "Wow" moment with a message of hope based in both the past and the future.

"Only Our Friends We Choose" is a magical musical concoction featuring harmonies you have to hear to believe. It's a jaunty little pop song with baroque colorings and a chorus that will not leave you alone. The light, airy piano led arrangement features light percussion and strings, and is a pleasant change of pace. On "Queens Of Ice", The Portraits take on a socio-political bent that could be seen as a criticism of one aspect of British society. It's an entertaining tune; highly creative in construction. The Portraits keeps up the social pressure in "Our Time", an indictment of the standards of society in an age where when wisdom is shunned as inconvenient at best. "I Am Made Queen" is an apologist ode to the human tendency to elevate the new and unknown to importance over the known and familiar. Here it is viewed in cultural terms, wrapped up in a stirring melody and stellar arrangement. Reilly is at her vocal best here, soaring with a song with the potential to become a signature or keynote song for the Portraits, as well as for other artists who choose to cover it down the line.

In the experience of two albums there's not been a Portraits song that failed to have substance, and that has not changed, but if you want a snapshot of the pure aesthetic beauty they are capable of check out "Colours". The song has depth, but Reilly and Millington weave their voices through a simple open arrangement to create four and-a-half minutes of pure beauty. "Click Click Click" is a song about the fleeting essence of time and all that we might accomplish in the world. Delivered at 160bpm, the song has a sense of urgency that picks at you as you listen. Millington takes lead here in his finest performance on the album. "Bago Girl" is a musical portrait of strength and resilience in a child in the face of oppression. It is a testament of the strength of the human spirit; a sign that beauty can grow from desolation if tended properly. The Portraits close with the wide open arrangement of "Old Stone Table"; a sonic exercise that offers original interplay among the voices of Reilly and Millington and their support instruments, although the incessant, repetitive nature of the piano part in this song wears hard. One suspects that repetition represents the immutable object of the song's subject, but it just plays as too much. It's perhaps the one solid complaint on the whole album; it's just unfortunate it comes as the final impression of the album.

The Portraits blend sophistication with simplicity; a classical mien with modern mores on The Blushing Of A World In White. Infused with musical and rhythmic influences drawn from at least four continents, The Portraits create thought-provoking works of art in song. The Blushing Of A World In White doesn't so much mark a change for The Portraits as it does the next step in their inevitable development. The create force majeure comprised of Lorraine Reilly and Jeremy Millington is destined to never rest in their search for new creative avenues in music. It's for that reason that The Portraits always sound fresh and inspired. This is a must-have album.

Learn more about The Portraits at http://www.theportraits.info/ or www.myspace.com/theportraitseurope. The Portraits are donating a portion of all sales of The Blushing Of A World In White to a school for orphans in Mandalay, Burma. The Blushing Of A World In White drops on June 21, 2010. CDs and Downloads will be availble on The Portraits' website. CDs will be a (very reasonable) set price. For downloads, you can set your own price.
Posted by Wildy at 5:10 AM