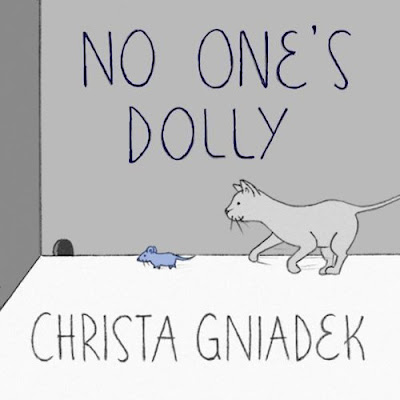 Bostonian Christa Gniadek jumped into the music game officially in March of 2009 with a highly personal EP entitled Alone Or Lying, a personal treatise on the people, places and events that had touched upon her life up to that time. Gniadek returned in January of this year with No One’s Dolly, continuing in the highly personal vein (ala Rachael Sage or Aimee Mann) but with a bit more polish. Gniadek is already working on her next album, also due in 2010, but for now we’ll focus on No One’s Dolly. Gniadek is highly independent, starting her own production company in 2009. Did I mention that Gniadek is all of nineteen years old? Gniadek took classical piano lessons for nearly a decade before picking up a guitar as a high school junior. She hasn’t looked back, writing songs at a prolific rate ever since.

No One's Dolly opens with "Awake", where Gniadek shows a songwriting sensibility familiar to fans of Hope Sandoval. "Awake" isn't depressed or even melancholy, but is thoroughly at ease. "Sweetheart" is a powerful (yet low-key) declaration of self-assurance. The song is highly tuneful with real energy contrasted by an easy-going approach and speaks to the comfort and strength the lyrics imply. This is great songwriting. "Lonely Girl" is an amusing tune from someone who is very cynical about relationships; sparkling with wit and intelligence and the premise that the narrator is difficult to love. Gniadek raises the bar here with a highly personal story in song married to a melody that will recur to you throughout the day.

"Cold Daydream" is sleepy, as you might expect, but hardly listless. "Cold Daydream" floats past you, taking you along for a ride with perhaps the prettiest melody on the album. Melancholy does assert itself on "After All", but it's wrapped in such beauty you might miss the pre-text. Gniadek is at her most pensive here, and listeners will be drawn in. The wheel turns on "Stronghold" as Gniadek explores the sudden flush of love that often takes us by surprise. It's a gorgeous tune offered with a low-key delivery that results in a powerfully emotive listening experience. "Like You Do" is a sweet, plain love song that may border on being a bit too low-key given the subject matter, but Gniadek brings the song to life with emotions that are both powerful and subtle. Gniadek picks an apt closer in "Who's To Say", a song all about letting go. A minimalist arrangement highlights the sweet melody as Gniadek sends listeners on their way.

Christa Gniadek surprises with No One's Dolly. On first blush you might dismiss her low-key style, but if you listen closely there is a great deal of life in the still waters of Gniadek's muse. No One's Dolly may not be Gniadek's debut, but it will certainly serve as a worthy introduction to a young artist whose only going to get better. Christa Gniadek will charm you if you let her.
Rating: 4 Stars (Out of 5)
Learn more about Christa Gniadek at http://www.maidenbrainmusic.com/ or www.myspace.com/christagniadek. No One's Dolly is available as a CD or Download from Amazon.com. Digital copies are also available via iTunes.
Posted by Wildy at 6:49 AM