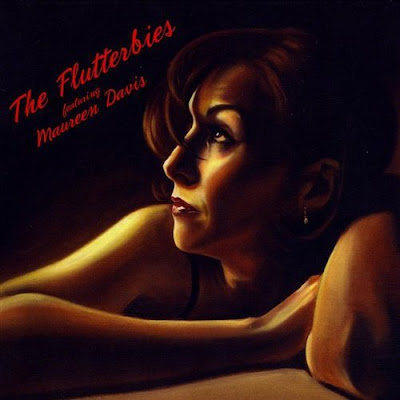 A Broadway diva goes country? Yes, it’s true. Maureen Davis may be the vocalist for one of the hottest alt-country bands on the Los Angeles scene, but she got her first big exposure in show business in the role of Sleeping Beauty in the original Broadway Cast of Stephen Sondheim’s Into The Woods. Davis has a voice that can go from sweet to gritty and back faster than a Lamborghini doing 0-60, but it’s the nuance she’s capable of that will knock you over. Not to be upstaged, The Flutterbies are an amazing back band, playing together as if they were one organism rather than individual players. In short, this is a band you need to hear. Luckily, The Flutterbies released their debut EP last year, coincidentally entitled The Flutterbies.

The Flutterbies opens with "Louder Louder", a blues-crusted rocker with a bit of punk-a-billy attitude that will make you want to slam dance the cowboy standing next to you. Vocalist Maureen Davis is personality-plus with her rocker-girl mystique and sultry voice. The Flutterbies are as tight as can be at Davis' back, matching her step for step through the raucous tune. "Hummingbird Heart" is a tremendous statement of vulnerability for a heartsick soul who continually is hurt by love but continues to be held in its gravity like a moth drawn to a back porch light. It's a wonderfully low-key follow-up to the wild opening number and says more about The Flutterbies' (and particularly) Davis' depth as performers. The song has been adopted by gettoknowusfirst.org, an organization working to repeal California’s Proposition 8.

"How I Get Over You" is a big, messy blues-rock tune that finds Davis getting over her poison by taking it again and again. It's a swanky tune with a familiar premise, but it plays like a new idea in the capable hands of The Flutterbies. "Faith In Rain" is a quiet moment of introspection laced with a mournful pedal steel guitar that serves as the perfect complement to Davis' voice. Don't be surprised if this tune is picked up by other artists down the line as a cover tune. It's a great piece of songwriting. "Kill Him With Kisses" is a song of love and obsession, built on one of the swankiest blues-rock arrangements you're likely to come across. The Flutterbies closes with "Damn Glad", a pensive tune about getting out of a bad situation, and the hope for new things that grows out of leaving behind the things that do not work.

The phrase "a breath of fresh air" is pure cliché, and yet occasionally an act comes along where as a reviewer I get to use that phrase with no pretense. The Flutterbies featuring Maureen Davis is one such act. The Flutterbies is a powerful and moving EP that marks the coming out of Maureen Davis, with a voice that can shatter glass one moment and melt hearts the next, all without missing a beat. Add to that an impressive and cohesive band behind her, and The Flutterbies show real potential for long-term success. The Flutterbies is an EP you'll still be pulling out to listen to ten years from now.

what a terrific review...honored and flattered and floored.
xo maureen of the flutterbies

completely deserved. she's a treasure who is destined to have an illustrious career.

love the cd and her live performances are amazing .. don't miss her video!