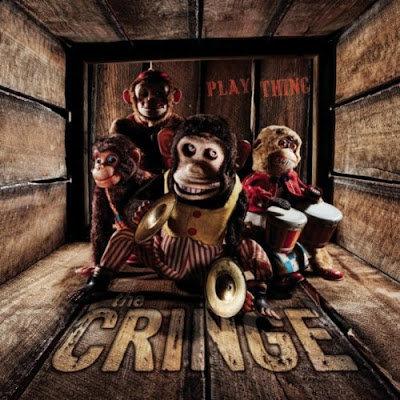 Led by singer/songwriter John Cusimano, New York City quartet The Cringe have been breaking barriers as they’ve grown into their sound over the last several years. Influenced by bands such as the Foo Fighters and The Vines, The Cringe also recalls the pure punk energy of The Minutemen. The Cringe dropped their third album, Play Thing, earlier this year. It is the band’s most musically aggressive and creatively challenging work to date.

Play Thing opens with "Ride", a raucous rock n roll opener with all the chutzpah of a 1980's glam band. A big catchy chorus wrapped around a killer hook makes this serious pop/rock radio material without conforming fully to the mores of pre-programmed, payola-laden criteria used to craft commercial playlists these days. That distinctive pop sensibility continues with "Weary Me" in spite of a slightly darker feel. The Cringe gets existential on "In The End (We Are All The Same)", a dry but musical offering that serves as a contemplative change of pace. Vaulting back to the rafters, The Cringe launch into "Where It Hurts", a break-neck scramble full of dark harmonies and tight, complex interplay that breaks down into a calm temperate moment before launching itself against the wall once again. It's a highly entertaining listen and certain to be a fan favorite on stage.

The Cringe offer up a more traditional rock ballad on "No Control", aiming perhaps for a bit more popular exposure. The energy here just won't cut it however; The Cringe sound lessened here, like they've sacrificed their core vitality for a repetitive song without a lot of heart. Recovering nicely, "Hiding Space" bridges the gap between 1960's CSN-style rock and 1990's alt-rock as an eccentric-yet-likeable track. The Cringe offer up their frustration with the direction of the world, yearning to "Start Again" in a fairly prototypical alt-rock track. There's solid musicality to the song, but the energy is a bit flat. The band perks up on "Knee Deep", a classic/southern rock influenced song about the sort of love that consumes you. It's a decent rock track that will get your toes tapping.

Get your lighters ready for "When I Stay Home", the sort of rock tune that gets crowds on their feet and swaying en masse. This transitions into the stripped down "Poison", which begins as a manic waltz that accelerates with its own sense of urgency to a pace that dances on the edge of comfort within its incessant musical shell. There's an urgent quality to the song that walks the sharp edge between infatuation and obsession. The dark, heavy turn the song takes two minutes in would suggest that line is crossed. "Friends & Family" is pure punk, delivered in wonderfully dark harmonies; a gothic take on the style and energy of early Police singles. Play Thing bows with the big rock balladry of "Give And Take"; giving fair play to relationship troubles but in a song that lacks the courage, or at least the vitality of its convictions.

The Cringe has mixed success on Play Thing, showing great energy at times but coming off flat nearly as often. It's almost as if the band chose some songs they love to play, and some songs they thought might get them some love from popular radio formats. The difference is very noticeable; almost as if two bands with the same style are chronicled here. The Cringe sound good even on the flat material, but there's vitality to this band that explodes through the cracks when they're on their game. The glimpses of it on Play Thing make the album worth it. Hopefully they'll find more consistent outlets for that energy on their next effort.

Rating: 3 Stars (Out of 5)
Learn more about The Cringe at http://www.thecringe.com/ or www.myspace.com/thecringe. Play Thing is available on CD or as a Download from Amazon.com.
Posted by Wildy at 5:05 AM