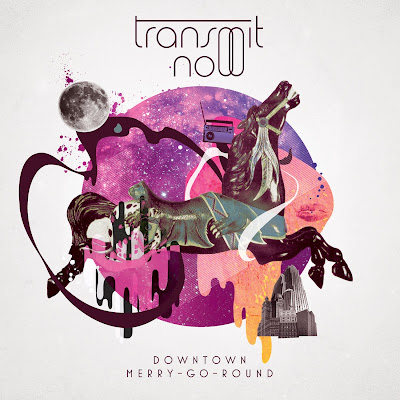 Orlando’s Transmit Now has come a long quickly. The band had their coming out on the Vans Warped Tour in July after winning a spot in an on-line contest. Since then, Transmit Now have won a contest through MTV, been featured on several MTV shows and even had one of their songs accepted during the People’s Choice Awards. With two prior EPs under their belt, Transmit Now signed to the Silent Majority Group in 2009. Today, Transmit Now unleashes their first full-length album on the world. Downtown Merry-Go-Round is a mix of high energy pop/rock and punk energy.

Downtown Merry-Go-Round opens with "What You're Thinking", a strong active rock tune with the pop sensibility to have some traction on the radio dial. The hooky chorus will grab you the first time you hear it. "Poster Boys" is another highly marketable rock tune, peppy and full of energy and ultimately tuneful. "Let's Go Out Tonight" has the hooks and theme to be a big summertime anthem. With the right breaks this tune could be all over the radio this summer. Transmit Now stays mostly on track through tunes such as "Issues", "Everything's Alright" And "Wish You Well", although the sound does border on formulaic.

"The Last Thing" is the compulsory sensitive ballad and a decent attempt even if it sounds a bit like a Rob Thomas cast off. Transmit Now finds their chutzpah again on "Stop Stop", a high-energy rocker that will have fans breathing a sigh of relief. This tune is highly danceable without giving up a sense of the band's aura of controlled recklessness. "Pick Up The Phone" has a wonderful sense of urgency that pervades the song; a dynamic rocker that is another likely winner at commercial/alternative radio. This song has one of the best choruses I've heard yet from the crop of albums due in late spring/early summer. Transmit Now closes with "Fast Ride", a proto-typical radio/rock tune featuring the sort of easy-to-consume chorus that corporate radio loves but lacking the dynamic energy that seems to make the band tick.

Downtown Merry-Go-Round is a decent effort. Transmit Now seems to be caught between creating a commercial album and the rock-n-roll cycle they crave. It's a fair mix; commercial enough to gain the band real attention in pop circles, but with enough honest rock nuggets to keep the purists mollified. Downtown Merry-Go-Round will likely expand Transmit Now's notoriety, hopefully enough that the album can find them worrying a bit less about whether radio will play their singles.