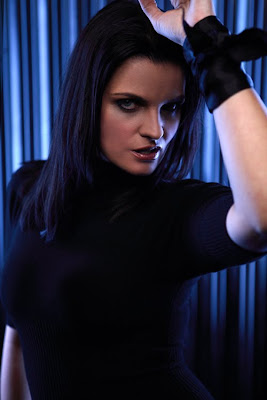 Canada’s Princess of Rock N Roll, Basia Lyjak, has created quite a stir with a series of singles that combine the rough edge of 1980’s rockers such as Pat Benetar, Blondie and Joan Jett with some of the pop sensibilities of artists such as Celine Dion or Chantal Kreviazuk. Lyjak has the voice and the look of a superstar. A demo of Lyjak’s singles, The Complete Collection, fell into our hands recently.

The Complete Collection opens with "Never Wanted Anything", a powerful, emotional rocker with shades of Pat Benetar and Celine Dion. This is a solid, radio-ready track with real oomph and honest emotion. "What It Feels Like" is an angry tune that allows Lyjak's rough edges some elbow room. "Don't Talk" is a great rock single with serious pop credentials that could be a hit with the right push. "Stuttering" would be entirely at home on 1980's pop radio and has one of those choruses you simply can't get out of your brain. This may be one of Lyjak's best overall tunes to date. "Torn" gets a bit repetitive, but has a big solid radio-ready sound that's likely to gain it some attention. "Lies" is pure anger and vitriol in song; solid rock songwriting with pop pre-texts. Lyjak saves her best for last; "Bye Bye" is a potential chart hit with a big upside. Get this song placed on the right TV show or movie soundtrack and you have the potential for this one to go viral.

Basia Lyjak combines the aura of a pop star with the rough edge of 1980's rock queens such as Joan Jett, Pat Benetar and Blondie. Lyjak perhaps isn’t ready to take the crown of Lee Aaron, but the day may come when she’s knocking on that door. The Complete Collection should be just a start for Lyjak, who has the sound and style to build a solid career at the glamorous crossroads where rock and pop meet.

Learn more about Basia Lyjak at http://www.basialyjak.com/ or www.myspace.com/basialyjak. Lyjak sells her singles and downloads directly through her own website, cutting out the middle man and saving listeners big dollars over what the big box e-tailers charge. You can also get digital with Amazon.com or iTunes. Photo credit: Ron Boudreau.
Posted by Wildy at 5:44 AM

yeah! great review! Basia is the real deal. I've witnessed her perform live many times and her feeling and emotion comes through in every song every time she sings them. I agree too that Bye Bye is a GREAT tune that she doesn't perform live often enough!! Love ya Basia! Can't wait to see you again!