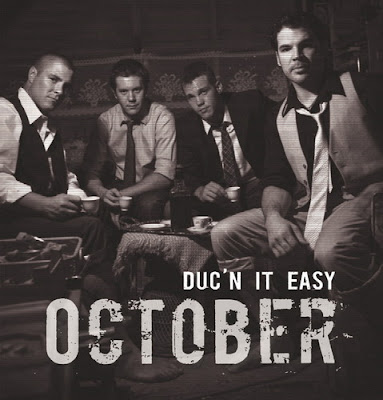 Duc'n It Easy - October [EP]
2010, Duc'n It Easy
Once you understand the origin of Duc’n It Easy’s name you’ll understand a great deal more about the band. Born when Steve Rice and Antonio Casasanta ran into each other one night in a bar in 2008, the band started out modestly. Not having the funds for proper gig equipment, Duct tape became the fill in of choice for mic stands, guitar straps, and essentially anything else that was required. Duc’n It Easy became a working motto for the band as well as its name. This spring, Duc’n It Easy brings that same carefree, “it’ll work” attitude to their debut EP, October.
October opens with "Little Games", a dark and unrewarding track mired in relationship troubles. The song's heart is in the right place for what it tries to do, but the execution here isn't up to the level on the rest of the EP. "Fallin' From Grace" is a poetically titled song about giving yourself up to another; it's a carnal experience that seems to be more about bravado than emotion. It's a decent tune. "October" is the best song on the disc, even if its meaning is somewhat mired in imagery that doesn't make complete sense. Vocalist Antonio Casasanta doesn't always have the tightest grip on the melody, but his anachronistic sound is charming in this setting.

On "Whiskey & Peanuts", we get a picture of Duc'n It Easy as a band with southern rock intentions (or at least afterthoughts). The straightforward arrangement offered up here is solid. And while Casasanta has a certain measure of charisma, his brand of charisma doesn't always fit well with the songs Duc'n It Easy writes. This song is one example. It's a catchy tune with a lot of baggage. On "Sweet Melody", Duc'n It Easy shows off at their instrumental best. The band finds a cohesion here that's never entirely absent but often not entirely there on the rest of October. Closing out with "Duc'n It (Back to MA)", Duc'n It Easy gives listeners a glimpse of the roots style that lies somewhere at the heart of their songs. This one is a traveling song, like so many before, where the road provides nourishment, but home is the place to be.

Duc'n It Easy offers up a pleasant mix of songs on October, blending rock, roots and southern rock into a sound that's mostly cohesive and generally enjoyable. There is a certain messy, chaotic sense to Duc'n It Easy that isn't strong or openly apparent, but always rests just at the edge of hearing. Whether this is stylistic or accidental it does serve as something of an attraction. The performances on October are actually quite solid, and the songs can be quite catchy, but it feels as if Duc'n It Easy isn't always in-synch.

Learn more about Duc'n It Easy at http://www.ducniteasy.com/ or www.myspace.com/ducniteasy. October is available on CD from Duc'n It Easy's webstore. Digital versions are available via iTunes.
Posted by Wildy at 5:00 AM