Abi Robins - For Luck Or Lie 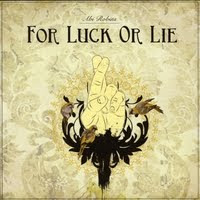 Abi Robbins is back with her third album, For Luck Or Lie, on her own Morningbird Records. Like on previous efforts Hey, Sunshine! and A Conversation With Myself, Robbins goes for highly personal subject matter delivered in matter-of-fact lyrical and musical marriages. Her delivery and style may remind you of Rachael Sage, Amy Mann or even Dana Wells, although Robbins may have sacrificed some of her more dynamic style this time around. For Luck Or Lie is essentially a breakup album, or perhaps more about the psychological process that leads to the breakup. Rather than surfing over the light and dark spots of her own psyche, Robbins dwells almost solely in the darker rooms of her memory palace on For Luck Or Lie, examining how one gets into a hopeless relationship and all of the energy that gets wasted trying to save what we've put so much time and effort into.

The result is a litany of frustration in music, tempered at times by hope that Robbins buys into but never truly believes. For Luck Or Lie opens with a song of self-sacrifice, "Buried". This is the starting point of realization, but it comes slowly. "Well Cut Dead Grass" is highly metaphorical, as if Robbins' mind turns slowly to the idea of getting away, introducing the concept in very vague terms that are slow to take root and blossom. Initial doubts are met by resolution, "Soldier" and justification, "The Art Of Forgetting". The steps down begin with "At Least For Now", the first acknowledgement that the end may come. "520325" is the best songwriting on the disc, although the meaning is shrouded deep in numbers that may mean much to Robbins but may be elusive idols to listeners. Stylistically, Robbins sounds a bit like Ron Hawkins here.

"Small Voice" is perhaps the turning point of the album, and as Robbins transitions into "Now You Know", Robbins begins to come to terms with what must happen. It's a song about the misgivings that grow inside misguided love like a cancer and the toll they can take. "Fool" and "Plans" presage the end, while Robbins regains control of her life with "Any More". Robbins uses the musical canvas to paint a grander picture than lyrics alone could tell. The strings are a nice touch, expressing new growth and a freedom from all of the mess that's been running around her brain up until now. "Pray Tell" is the album's epilogue; asking, essentially, "what's next?" It's clear that she still finds value in the person she's just left behind, enough to hope she'll be forgiven for doing what she needed to do. One senses a slippery slope here however; as "Pray Tell" perhaps leaves a crack of hope that something may bloom again one day.

Lyrically, For Luck Or Lie is among Robbins' best work, but the relentless tone of the album can be a bit tough to take. If you're not listening carefully, a few songs may run by you without really distinguishing themselves one from another. The dynamics and tone really don't change much until the last couple of songs, and this may turn off some listeners. It's a solid effort, but perhaps a bit too consistent to really grab your attention.

Learn more about Abi Robins at http://www.abirobinsmusic.com/ or www.myspace.com/abirobins. For Luck Or Lie is available as either a CD or Download from CDBaby.com.
Posted by Wildy at 5:40 AM