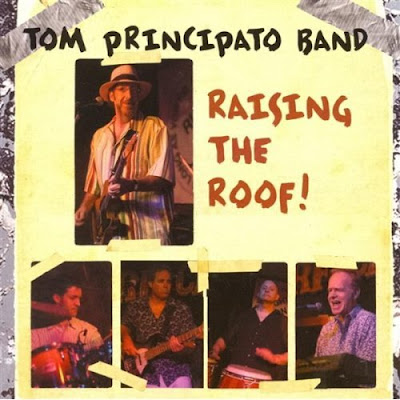 Tom Principato Band's Raising The Roof! blends Blues, Funk, Reggae and Rock with dashes of New Orleans spice for a fun music ride. Principato has fun marching through numbers such as "Lock And Key", "Lies" and "They Called For 'Stormy Monday' (but 'Mustang Sally' is just as bad)", but truly shines on the instrumentals. The funk-driven "Too Damn Funky", "Bo-Bo's Groove" and the sweet, lyric "Mi Solea" show off Principato's guitar work as well as a tight band that bend and twist to Principato's every move. Raising The Roof! doesn't offer up anything that will blow listeners away, but it's a solid mix of rock n roll with other styles that is certain to appeal to the musicians in the crowd and is very much worth an occasional listen.
Rating: 3 Stars (Out of 5)

Learn more about Tom Principato at http://www.tomprincipato.com/ or www.myspace.com/tomprincipato2. Raising The Roof is available as either a CD or Download from Amazon.com.
Posted by Wildy at 5:00 AM