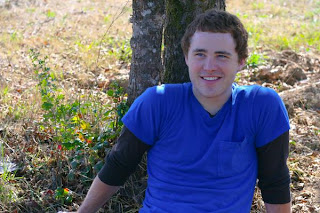 Patrick Hammond - Only If You Can Hear Me
2010, Talkback Records
Forest Grove, Oregon's Patrick Hammond looks like a movie star and sings like a cross between Isaac Slade (The Fray) and Gavin DeGraw.  These qualities combined with solid songwriting skills and easy-going airs are why Hammond's debut album, Only If You Can Hear Me is gaining so much attention from radio and media outlets.  Due out October 26, 2010, Only If You Can Hear Me is a pure pop/soul blend primarily driven by Hammond's piano playing and a strong melodic sense.  Hammond might have gotten involved in music for easy grades in high school, but his talent has seen him rise far beyond his earliest ambitions.
Only If You Can Hear Me opens with “Mr. Deception”, in intriguing musical monologue that finds Hammond’s character boldly honest about his intentions and shortcomings.  This is a great piano-driven tune, with Hammond’s vocals aligned perfectly with both the song and its heart.  “The World Today” is a forthright pop ballad lamenting the ‘all for yourself’ mentality of society and features Nathan Botsford.  It’s a decent tune with heart.  “30 Days” documents one man’s relationship gauntlet by which he judges the future of any relationship he’s in.  The vaguely dysfunctional perspective given here is entirely human and is offered in an open, appealing arrangement with a melody you’ll remember.  “Heart Attack” is a swarthy pop song about staying in control of your emotions; Hammond is more focused on substance that image here and in the process displays a gripping pop sensibility.
“The Garden” sounds like a star crush in song, with Hammond obsessing over a singer on-stage and capturing that moment of infatuation and awe perfectly.  On “Put Me Down” Hammond offers an incredibly soulful in a highly emotive and personal performance.  Hammond gives a commanding performance here.  “The Initiative” shows that sometimes reaching out is all it takes.  This heart-melter is a big-time pop ballad with real chart potential.  “Take Hold” is a Christian-themed pop tune about taking ownership of what you think and believe.  Hammond is as solid is ever, and is joined here in the vocal duet by the beautiful voiced Sunita Thannickal.  “Farewell” is a solid song of love and remembrance, a nice set-up for the bonus track “She Dances Her Demons Away”.  This last is a personal and raw affair; just Hammond and his guitar, but has a killer melody and will get stuck in your skull.
Patrick Hammond delivers a boatload of positively themed rock and pop on Only If You Can Hear Me.  Hammond writes from his well of belief, which happens to be modeled from a Christian perspective, but only one song here is overtly so.  The rest of the time its simply Hammond’s thoughts, beliefs and character shaping messages about life that are ecumenical and filled with heart.  The songwriting on Only If You Can Hear Me is solid throughout, and Hammond delivers each tune with a depth of personality and command that will make him lots of fans on stage.  This is an extremely promising start to a career.
Rating: 3.5 Stars (Out of 5)
Learn more about Patrick Hammond at www.myspace.com/patrickhammondmusic.  Only If You Can Hear Me is available digitally through iTunes.  If you're looking for a CD, send a message to Patrick Hammond through his MySpace page.
Posted by Wildy at 6:57 AM