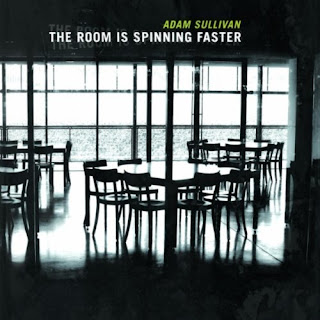 Adam Sullivan - The Room Is Spinning Faster
2010, Dweeb Records
Adam Sullivan gets compared to Billy Joel and Ben Folds a lot, but his musical roots are in the darker melancholy of Randy Newman and REM.  With eleven albums/EPs under his belt and ambitious international touring schedule, Sullivan has paid his dues and developed a solid fan base the world over.  His latest album, The Room Is Spinning Faster, shows the polished artistry of a songwriter who knows his craft combined with the restless rambling urge of someone who needs the road even if he's started to question his place on it.  The Room Is Spinning Faster is due out in October 2010 on Dweeb Records, but is already available in digital formats.
Adam Sullivan starts out strong with "Nothing Like Being Alone", rumination on his place in the world, sanity, perspective and understanding.  It's a Ben Folds-style ballad that's highly introspective, a soaring melancholy ode to self-contemplation.  "But The Dinosaurs Were Dead" is edgy, smooth pop, once again reminiscent of Folds.  The instrumentation here is unique, making use of piano and string to create an off-balance sound that somehow stands on its own.  "Please Don't Fall In Love With Me" is great songwriting, a melancholy and thoughtful love song written from the depths of fear and confusion.
Up to this point Adam Sullivan is setting the stage.  With "Rainy Morning In Amsterdam" he sets the tone for the rest of the album.  It's a song of morning and regret, a pool Sullivan wallows in the rest of the way utilizing a Hemmingway-styled symbolism for tragedy and defeat while singing in measured tones.  Sullivan is searching for he knows not what.  "Something To Lose" is rambling and melancholic but lacks real energy.  The melody and harmonic construction here are gorgeous, but the song teeters on the brink of an emotional vacuum that is disconcerting.  "These Are The Thoughts" is a long-winded, emotionally grinding experience built in this same dearth of emotional energy.  It's the thoughts that keep him awake at night, told from the perspective of one so numb it's more of a recitative than an experience.  "Let Go" shows a flash of life; pretty and dark with a modality reminiscent of Alan Parsons, "Let Go" reflects a sort of determined, reticent hope about what is to come.  The rest of the way is back to the flat, emotionally bereft energy that haunts the middle of the album, as Sullivan walks the listener back to the sleep from which he first emerged.
Adam Sullivan constructs some beautiful musical landscapes on The Room Is Spinning Faster, but against those landscapes he casts a character so lost in his own melancholy and emotional distance that the songs take on a sort of fractured personality.  Artistically challenging, but the combination can make The Room Is Spinning Faster a challenge to get through.  If the navel-gazing melancholy and passive anger of The Cure or The Smiths or even REM you find appealing, then Adam Sullivan will fit nicely in your music collection.  Sullivan may be a bit too distant for the mass market, but the talent here is unmistakable.
Rating: 3 Stars (Out of 5)
Learn more about Adam Sullivan at www.adamsullivan.com or www.myspace.com/adamsullivan.  The Room Is Spinning Faster is due out in October 2010 on CD, but can be purchased now in digital formats through Amazon.com

The Moon
shines
on a cat

As a native Swede,I am particularly proud of my love poetry suite Sonnets for Katie.