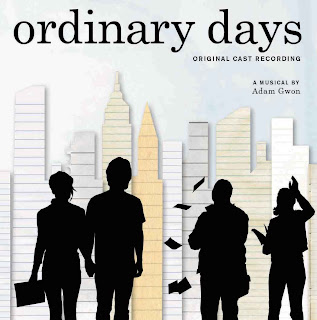 When The Roundabout Theater Company opened Ordinary Days for its Off Broadway debut in the Fall of 2009 the reaction was immediate. Rave reviews and word-of-mouth seemed to confirm the prescience of The Dramatist Magazine in naming composer Adam Gwon one of the "50 to Watch" in Theater. The 2008 Fred Ebb Award winner for excellent in musical theater songwriting has opened eyes and ears with a modern musical theater writing style that maintains the classic elements and feel of Broadway. Ordinary Days so impressed Rodgers & Hammerstein Theatricals that they purchased the performance rights to the show. On September 21, 2010 Ghostlight Records released the original cast recording of Ordinary Days, featuring Lisa Brescia (Claire), Hunter Foster (Jason), Jared Gertner (Warren) and Kate Wetherhead (Deb).

Listening to Ordinary Days you'd swear that Adam Gwon was raised on a healthy diet of John Robert Brown and William Finn, as the show sounds like it could be a collaboration between the two. Ordinary Days explores the lives of four young adults living in New York City as they navigate the difficulties of life, love and the ever shifting platforms of life expectations and reality. Ordinary Days opens with "One By One By One", setting the mark for idealism as Warren's idealism about his job quickly turns to frustration and then resolution about where he wants to be. Deb is introduced in "Don't Wanna Be Here" as someone who is never happy where she lands.

Jason takes the leap of faith in moving in with Claire in "The Space Between", while "Let Things Go" explores Claire's inflexibility as highlighted by the process of beginning to share her space with Jason. Meanwhile Deb's life is falling apart; the notes for her dissertation are lost, and she must beg for an extension in "Dear Professor Thompson (Part 1)" and later for an exception in Part 2. "Life Story" breaks up the two pleas with rumination on lost mementos and the loss these memories represent to those without them. It's a surprisingly apt perspective; the sort of song that's likely to be performed outside the bounds of the show.

"I'm Trying" represents a relationship in trouble, as the participants look outside of themselves to make things better. In this case the focus is a list of ten things to do before you leave New York. This works for a while but works in many ways to expose their differences more than bring them together. The four cross paths at the Metropolitan Museum of Art. Jason is trying to relight the fire with Claire, while Warren, who has found Deb's dissertation notes, invites her to meet him at the Met to return them. Warren wants to get to know Deb, as he's enthralled with the passion and fire he sees in her notes. Deb initially rejects the concept, but Warren's perspective on Monet opens her eyes to the type of person he is.

Meanwhile Jason and Claire are beginning to see where their paths diverge. Jason ruminates over his "Favorite Places" and the one he's never been (Claire's Heart). The song is a brilliant moment, and Hunter Foster places it perfectly. "Sort-Of Fairytale" is first hint of catalyst for change for Deb; coffee at Starbucks with Warren. Deb is quick to judge Warren for his lack of a grand life plan, only soon to realize that her plans are full of holes ("Big Picture"). "Fine" finds Jason and Claire walking together in the rain on the way to a family event. It's the falling out you've known was coming all along, with Jason proposing as a close to the fight. Claire "accepts" before she realizes what he's said, and then runs off leaving him standing in the rain.

"Hundred-Story City" finds the relationship between Jason and Claire pushed to the brink due to Claire's inability to find happiness. This idea is presented as an archetype for dreams in a city that can run roughshod over the best of intentions. "Calm" finds Deb losing it in a meeting with a professor and running blindly into the Penn Station and on a train for New Jersey. Getting off at a random stop she puts down a deposit on a house because it's calm but quickly realizes it's so calm it will drive her mad. This becomes the beginning of a realization that running won't solve her problems, although this doesn't fully materialize for a bit. "Life Story (Reprise)" revisits Warren as he is losing faith in his plans but is given a sudden lift as Deb calls. "Gotta Get Out" is a random taxi ride, a flight of fancy that leads to perspective. It's a grab for control that leads Claire to realize she has control over her life and doesn't need to keep fighting for it.

"Rooftop Duet/Falling" finds perspective for Warren and Deb, with both realizing, in effect, that by letting go of their dreams they will be realized. This is accomplished in the imagery of a fall of paper from far above the city. This event flows downstream and affects Claire and Jason. She finally opens up to Jason about a love lost and how she is finally ready to move on. It's an amazing tune and has that air of magic that marks a great musical moment and flows into a promise for the future ("I'll Be Here"). Ordinary Days closes with the rather enjoyable "Beautiful", a sort of musical moral. The only problem here is that the moral has been so well drawn in the lines of the musical itself that the song feels redundant at best; a cynical bit of preaching at worst. It's as if Gwon either hasn't trusted what's come before to convey this message, or doesn't trust the audience to get it. Either way, it's a pretty afterthought that's unnecessary.

Aside from one minor misstep, Adam Gwon proves himself to be the real deal with Ordinary Days. The Original Cast Recording is exquisitely cast and has a magical flow. What's more, you can listen to the soundtrack and actually have a clear idea of the story. From a songwriting perspective there's not much more you can ask from a Broadway score. Ordinary Days is a great introduction to Adam Gwon, and seems a likely harbinger of amazing work to come. Don't miss out on the original cast recording of Ordinary Days. If you've lived in New York City, or if you've even been in a relationship then you'll likely see some of yourself or the ones you love(d) in Ordinary Days. That's the primal element of its appeal, and the essential character of Adam Gwon’s songwriting that speaks to theater fans of all ages.

, and digitally from iTunes.
Posted by Wildy at 5:10 AM