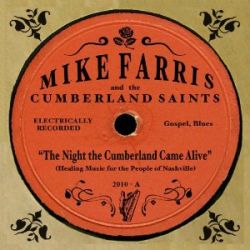 Mike Farris - The Night The Cumberland Came Alive
Mike Farris first caught the public eye as front man for The Screamin' Cheetah Wheelies.  He went on to perform with CSW, Peaceful Knievel and Double Trouble (Stevie Ray Vaughan's band) before becoming a practicing Christian and rejecting his former lifestyle.  In the time since, Farris has become a highly lauded performer in Gospel music, blending Americana, folk and blues into the mix.  His album Salvation In Lights made numerous critics lists in 2007, and Farris has been a regular performer in Nashville and at major festivals ever since.  Like so many others, Farris was deeply affected by last year's "thousand year flood" in Nashville and its environs.  On October 26, 2010, Farris releases The Night The Cumberland Came Alive", a six song EP that commemorates the event and celebrates the revitalization of the entire area.
Recorded just weeks after the flood, The Night The Cumberland Came Alive boasts an all-star cast of musicians, including Sam Bush; Kenny Vaughan (Marty Stuart); Old Crow Medicine Show's Ketch Secor and Gill Landy, The McCrary Sisters, Byron House (Robert Plant) and members of Farris' Roseland Rhythm Revue.  The EP opens with the title track.  Written about the flood and its aftermath, "The Night The Cumberland Came Alive" is pure pre-war Americana and Gospel and is full of the sort of energy that can only be inspired by great tragedy and triumph.  "Wrapped Up, Tangled Up" is a witness song in the Southern Gospel tradition.  Farris is amazing on vocals here in a powerful and moving arrangement.  "Down On Me" blends blues, folk and gospel in an inspired if somewhat tempered rendition.  Farris and Ketch Secor wrote "Dear Lazarus" just days before the EP was recorded.  The cut offered here gets a bit busy at times, but was essentially a jam.  Exuberance aside, you can hear the magic in the moment of the song.  "Mother Earth" is a song of humility in the face of then-recent events, a reminder that people spring forth from the earth and in time owe themselves back to whence they came.  Farris closes with "Don't Let The Sun Go Down On Me", an inspired tune and great close to what must have been a magical experience.
The Night The Cumberland Came Alive reflects the joy and thankfulness of a people who have stared destruction in the face and lived to talk about it.  It's a transitive moment and one that is captured in fine form by Mike Farris and friends.  This EP is a gift to all humanity, not so much even for the music but because it captures the moment so perfectly and completely.  That's not a knock on the songs on The Night The Cumberland Came Alive; the entire EP is a first class listening experience.  This one's special.
Rating: 4.5 Stars (Out of 5)
Learn more about Mike Farris at www.mikefarrismusic.net or www.myspace.com/mikefarrismusic.  The Night The Cumberland Came Alive drops on October 26, 2010, but you can pre-order the album on CD or as a Download

A portion of the proceeds from The Night The Cumberland Came Alive will go toward feeding and clothing the homeless of Nashville.
Posted by Wildy at 5:10 AM