The Headers - Don't Be Talkin' Smack 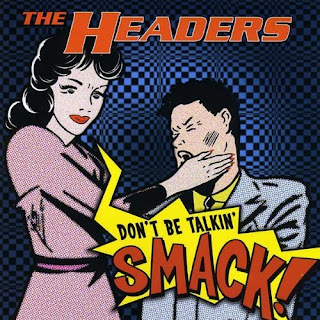 The Headers - Don't Be Talkin' Smack!
2008, The Headers
Buffalo rockabilly trio The Headers are about as close to legends as a local band can become.  The band includes two members of the Buffalo Music Hall Of Fame: Vocalist/guitarist Bobby Lebel and bassist/vocalist Scott Freilich.  The band is rounded out by drummer Dan Stoll, and works some of the most inspired 1950’s style rock n roll this side of The Stray Cats.  The Headers’ most recent album, Don’t Be Talkin’ Smack!, was released in 2008 and shows off the band’s distinctive talent and sound.
Don't Be Talkin' Smack! opens with "Brand New Gretsch Guitar", a Brian Setzer-style 1950's rocker that's virulent.  The song seems a bit cynical, as The Headers are sponsored by Gretsch Guitars, but that won't keep you from dancing when the song plays.  "Bun In The Oven" is highly entertaining, and the guitar work of Bobby Lebel is fabulous.  You'd almost swear that's Elvis Presley on vocals.  "Don't Be Talkin' Smack" breaks out the barre chords for a jazz-tinged big-band electric trip.  Lebel wants to be a crooner here until the chorus when he brings attitude.  "She's Through With You" is a gloating romp written from the perspective of the winning leg of a love triangle.  It's a very danceable tune in spite of the gleefully dark tenor of the song.
"Deadman's Curve" finds The Headers breaking out the surf guitar style in a dark anthem done eight-to-the-bar.  It's a very catchy song, but full of deep roiling angst that sometimes pervades the surf style.  "Ragtop Daddy" is the perquisite car anthem and leads into wonderfully read "Sandman".  The Headers take the classic record from The Chordettes and craft it into a distinctly understated and stylish rendition.  "You Lift Me Up" shows off the band's vocal harmonies in a classic-style love song.  The Headers closes with "Offa My Mind", a mid-tempo that brings the band firmly into the 1960's.  The band's vocal harmonies are once again impressive, and "Offa My Mind" is among the most danceable on the album.
The Headers offer up new material with a classic touch on Don't Be Talkin' Smack!.  The presentation is a bit kitschy at times (right down to the Elvis-style vibrato on the lead vocals), but the songwriting is solid and The Headers play together as if one.  What Don't Be Talkin' Smack! might lack in presentation it more than makes up for in the pure joy of the music.  The Headers are a band you can't help but enjoy listening to.
Rating: 3 Stars (Out of 5)
Learn more about The Headers at www.theheaders.com or www.myspace.com/theheaders. Don't Be Talkin' Smack is available from Amazon.com as a CD or Download

The album is also available digitially from iTunes.
Posted by Wildy at 5:00 AM