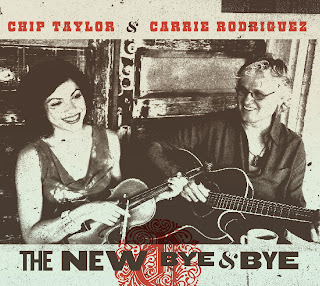 Chip Taylor & Carrie Rodriguez - The New Bye & Bye
2010, Train Wreck Records
It was a fated meeting at SXSW in 2002 that brought Carrie Rodriguez and Chip Taylor together.  From 2003 through 2005 the duo put out three critically acclaimed albums on Taylor's Train Wreck Records and toured the world together.  In that time Rodriguez blossomed as a singer and solo performer, and Chip Taylor found his passion for songwriting and recording reborn.  In 2006 the duo parted ways to pursue their own interests, with Rodriguez going on to become a successful recording artist in her own right and Taylor reclaiming his mantle as a legend-in-waiting of Americana music.  On October 12, 2010, Train Wreck Records will release The New Bye & Bye - The Best of The Train Wreck Records 2002 - 2007, featuring 13 tracks from past releases and four new songs.
The New Bye & Bye really isn't an album you analyze but one you let wash over you.  Taylor & Rodriguez don't so much tell stories as create moments for the listener to experience, the sort that usually might only be found on a back porch on a Texas summer night (with gracious nods to Appalachian folk).  Highlights include "Your Name Is On My Lips", a mournful love song with a sense that the narrator has been here many times before.  The song is full of sorrow without a sense of being overdone.  Rodriguez chips in on vocals but it's here violin in the break that highlights the sorrow as if interpreting the heart of it all.  "The New Bye & Bye" is a fight in song, with Rodriguez spitting fire while Taylor plays the placating miscreant in an old-school country musical play.  "Don't Speak In English" is the utter highlight of the disc; a tune about breaking out of the ordinary where such is made unimaginable by life circumstance.  The mix of toughness and vulnerability here is stunning, and Taylor and Rodriguez both run with it.  "All The Rain" is a rambunctious turn, the best instrumental work on the album and a highly danceable number you won't soon get out of your noggin.
The New Bye & Bye features two live versions of Taylor classics.  "Angel Of The Morning" is done in the same vocal split employed throughout the album, with Taylor slightly in the lead.  While this may be appropriate considering Taylor wrote the song, Carrie Rodriguez lights up the stage in the moments when she's alone at the mic.  This would have been one time to allow here to have the whole stage.  "Wild Thing" is offered up here in a low-key version that paints the song in a very brush than the version made famous by The Troggs.  Taylor sings it like a love song sung by someone whose been beaten around by life.  The context illuminates aspects of the song you might not have before considered.  The two live tracks are performed by an all-star band that includes Taylor, Rodriguez, pedal steel master Greg Leisz (Robert Plant and Alison Krauss, Joni Mitchell), Bill Frisell and Buddy Miller.  The album closes with a reprise of "The New Bye & Bye", an apt closer.
If your taste in music runs to the roots of country, rock and folk as played on back porches across post-frontier frontier then you need to be listening to Chip Taylor and Carrie Rodriguez.  The New Bye & Bye is a great place to start, offering the best work of their years together and some nice new surprises.  Taylor and Rodriguez are very capable of making magic on their own.  Together they combine those collective talents with the sort of chemistry you can't buy or force.  The New Bye & Bye is essential listening.
Rating: 4 Stars (Out of 5)
Learn more about Chip Taylor and Carrie Rodriguez at http://www.chiptaylor.com/,  http://www.carrierodriguez.com/ or  Train Wreck Records.  The New Bye & Bye drops on October 12, 2010.  Pre-orders of the CD are available from Train Wreck Records and Amazon.com.

A digital version is available via iTunes.
Posted by Wildy at 5:10 AM